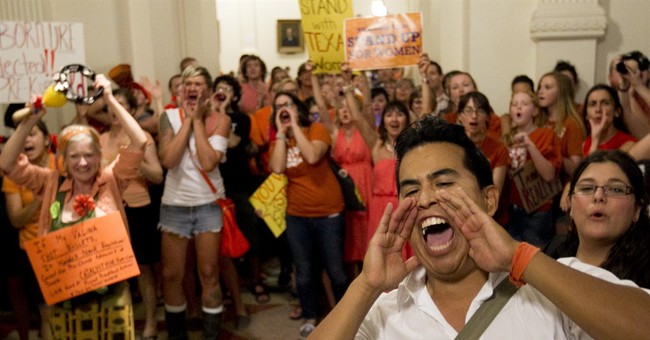 We knew this was coming for quite some time despite vile protestations and hours-long filibusters. Fox News has the details:

The vote came after weeks of protests and rallies drew thousands to the Capitol and made Texas the focus of the national abortion debate.

Republicans used their majority to pass the bill nearly three weeks after a filibuster by Democratic Sen. Wendy Davis and an outburst by abortion-rights supporters in the Senate gallery disrupted a deadline vote.

Called back for a new special session by Perry, lawmakers took up the bill again as thousands of supporters and opponents held rallies and jammed the Capitol to testify at public hearings.

In a statement released just after the vote, Perry said, "Today the Texas Legislature took its final step in our historic effort to protect life. This legislation builds on the strong and unwavering commitment we have made to defend life and protect women's health."

The latter part of Governor Perry’s statement is crucially important. Many abortion clinics in the United States -- as Live Action has meticulously documented and wrote about -- are unsafe, unsanitary and, at times, “third world.” The legislation in Texas therefore will actually raise health standards, ensuring women are properly cared for and protected.

Meanwhile, the pro-abortion crowd and Senate Democrats are not happy with the bill’s passage:

Democrats, though, promised a fight in the courts.

"There will be a lawsuit. I promise you," Dallas Sen. Royce West said on the Senate floor, raising his right hand as if taking an oath.

Let’s keep things in perspective here. The vast majority of Americans support the exact kind of legislation Governor Perry will presumably sign into law next week. The pro-choice zealots in Texas may be loud and engaged, but they do not represent the views of most ordinary citizens.

Trump: I’m ashamed that I endorsed Brian Kemp
Hotair
Biden Injures Himself While Playing With His Dog, Tongues Are Wagging
Redstate