Cuomo on NYC Mayoral Race: “Shame On Us” if We Elect Anthony Weiner 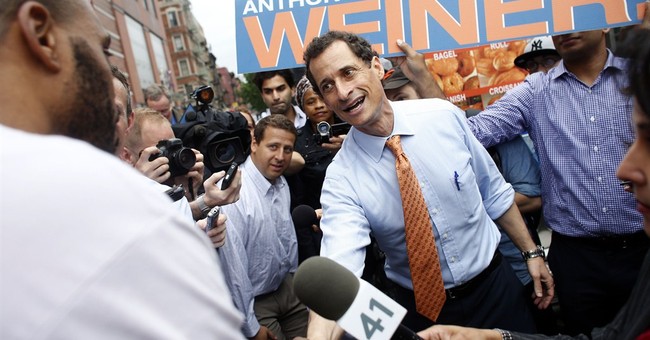 Andrew Cuomo’s comments about the mayoral candidacy of former Congressman Anthony Weiner may be a few days old but his assertion is still worth examining: after all, this isn’t just some random guy excoriating a member of his own ranks; he’s the governor of New York. Ouch:

Today, in an editorial board meeting with Cuomo and The Post-Standard and Syracuse Media Group, the governor was asked whether he thought the New York State Legislature should limit how long legislative leaders, like the Assembly speaker, should serve.

Cuomo repeated a version of his opinion on term limits: he believe [sic] elections are the way to limit political service.

The conversation continued between Cuomo and Stephen A. Rogers, chairman of Syracuse Media Group:

Cuomo: "It's basically democracy. Those are grownups (in the Assembly) who are picking, who pick their leader."
Rogers: "So if Anthony Weiner wants to run for mayor, he can run for mayor."
Cuomo: "He runs? He runs."
Rogers: "And if we elect him?"
Cuomo: "Shame on us."

Weiner, who resigned from Congress in disgrace almost two years ago, officially entered the mayoral race last Wednesday. He faces a crowded and competitive primary field, but the Washington Post seems to think, according to some pundits, that he has a fighting chance at making it past the first round.

On the other hand, even members of Weiner’s own party seem to think his days are numbered. Case in point: Here’s Congressman Charles Rangel (D-NY) on MSNBC earlier this week:

“I don’t think he’s going to have a serious impact on the outcome of the mayor’s race.”

Obviously Democrats aren’t exactly rushing to endorse a married candidate for public office who, less than two years ago, sent lewd pictures of himself to female college students via twitter. Still, Cuomo explicitly said he’s not planning on influencing the outcome of the race, although his “shame on us” comments -- which were exceedingly blunt and perhaps unexpected -- can’t be doing the former congressman any favors.