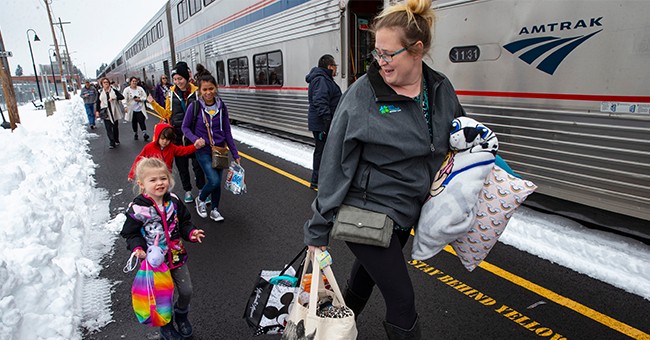 In Pittsburgh on Wednesday, the president unveiled his new $2.5 trillion "infrastructure" plan which, as Katie explained, has little to do with physical infrastructure at all. Most of the money is reportedly saved to fight climate change and social justice projects.

And Amtrak wants in. Amtrak, President Biden's famously favorite mode of transportation, is now seeking to take advantage of the president's new infrastructure spending. They are asking for Congress to pave the way to help them carry 52 million passengers a year by 2035. They also released their proposed map, which includes new routes to their schedules. Some rather long routes.

Some commuters were confused by the new routes while others were downright harsh. As social media users explained quite colorfully, those Amtrak trains are not exactly up to speed. Getting on an Amtrak train, they argue, is about the worst thing you could do if you're in a rush to get to your destination. You can pretty much plan on looking out the window all day.

Ive never understood why this country doesnt have decent and efficient rail service. Amtrak is a joke. Heavily subsidized and yet long awkward routes and very expensive. Id much rather a train than fly or drive but its not an option in this country.

Others asked why Europe is miles ahead of us when it comes to transportation.

Biden used to take Amtrak back and forth from Washington, D.C. to his home in Wilmington, Delaware to see his kids. He reportedly rode it every day for 36 years, earning him the nickname "Amtrak Joe." The Wilmington Amtrak station was named after him. He even bought an Amtrak ticket home after he announced his presidential campaign.

It’s an illustration of how political campaigns in America have changed that a few hours after launching his Presidential campaign online, Joe Biden is not at a huge launch party but sitting quietly on a train to New York with just a handful of aides pic.twitter.com/yMHFWsKoA3

We'll see if he honors the company's wishes.