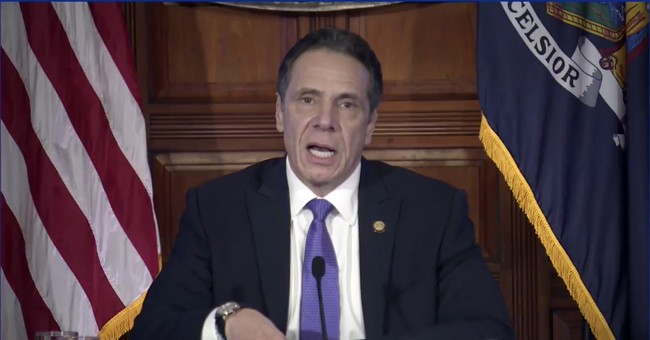 Weeks into Gov. Andrew Cuomo's sexual harassment scandal, top New York Democrats are finally calling for him to step down. Six women have so far come forward to accuse the governor of sexual misconduct. The most recent accusation may even reach to the level of a crime, according to the Albany Police Department.

"The repeated accusations against the governor, and the manner in which he has responded to them, have made it impossible for him to continue to govern at this point,” Nadler said. “Governor Cuomo has lost the confidence of the people of New York. Governor Cuomo must resign.”

And the dominoes just kept falling.

It is time for Governor Cuomo to resign.

This new crop of Democrats join the already 59 state Democratic legislators who have called for Cuomo to resign, as well as New York City Mayor Bill de Blasio.

Notably, Sen. Kirsten Gillibrand (D-NY) has remained largely mum on the accusations against Gov. Cuomo and opposed the calls for his resignation, claiming that “isn’t the right conversation we should be having." And yet, as observers have noted, Gillibrand was one of the lawmakers who led the effort to boot former Sen. Al Franken (D-MN) from Congress as he faced his own sexual harassment allegations.

“Enough is enough,” she said then.

In 2018 she also had no issues launching an attack on then Supreme Court nominee Brett Kavanaugh's character after one accusation.

Enough is enough. One credible sexual assault claim should have been too many to get a lifetime appointment to the Supreme Court and make decisions that will affect millions of women’s lives for generations. Two is an embarrassment. It’s time for a new nominee.

But now six allegations is not "enough?"

"When it comes to taking on Cuomo, though, Gillibrand can’t seem to find the courage, claiming 'It’s not my job,' and failing to even mention the governor by name except to remind everyone of his due-process rights," Alexis Grenell wrote in The Nation. "No mention of the women either, not even to praise their 'bravery,' as politicians who don’t know quite what to say typically do."

Senate Majority Leader Chuck Schumer has also not called for the governor's resignation.

New York Attorney General Letitia James has opened an investigation into the serious allegations against the governor. Cuomo urged New Yorkers to "wait for the facts" before condemning him.