Obama Sends Mixed Messages on AOC and 'Defund the Police' 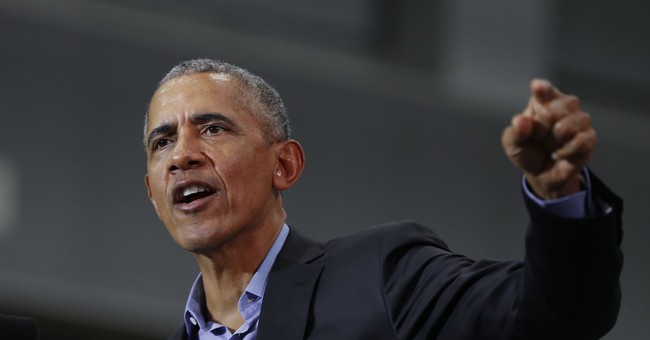 In his recent interview with Snapchat's "Good Luck America" host Peter Hanby, former President Barack Obama worried that members of the Democratic Party are turning folks off with radical messages like "Defund the Police."

But he was sending mixed messages, because in the same interview he said that the party needed to give a bigger platform to Rep. Alexandria Ocasio-Cortez (D-NY), one of the most consistent promoters of the anti-police slogan. Watch and read below to try and make sense of his argument.

"If you believe, as I do, that we should be able to reform the criminal justice system so that it's not biased, and treats everybody fairly, I guess you can use a snappy slogan like, 'Defund the Police,' but you know you've lost a big audience the minute you say it," Obama said. "Which makes it a lot less likely you're actually going to get the changes you want done. But if you instead say, let's reform the police department so that everybody's being treated fairly, divert young people from getting into crime and if there's a homeless guy, maybe we send a mental health worker there instead of an armed unit that could end up resulting in a tragedy. Suddenly, a whole bunch of folks who might not otherwise listen to you, are listening to you."

He went on to suggest that "Defund the Police" does little more than isolate voters.

Perhaps sensing that AOC was going to throw dagger eyes at him like she did Sen. Joe Manchin (D-WV), in the same interview Obama also encouraged the Democrats to give her a bigger platform, arguing that the 60 seconds she got at this summer's DNC convention was a measly crumb.

“But, you know, the fact that an AOC only got, what? Three minutes or five minutes?" he said. "When she speaks to a broad section of young people who are interested in what she has to say, even if they don’t agree with everything she says...You give her a platform, just like there may be some other young Democrats who come from more conservative areas who have a different point of view. But new blood is always good."