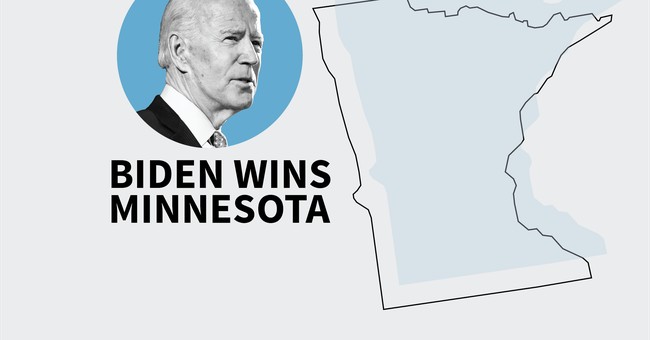 Democratic nominee Joe Biden has won the state of Minnesota. And so the trend continues. A Republican presidential candidate has not won Minnesota since 1972.

#BREAKING: Joe Biden has won the state of Minnesota, according to a race call by the AP. https://t.co/DvCX3AvKlp pic.twitter.com/YJQFUC6OJb

For those keeping track, the race was expected to at least be somewhat competitive. Trump lost Minnesota to Hillary Clinton in 2016 by just 1.5 percentage points, or about 45,000 votes. And in the past year or so Trump's rallies in Minnesota have been packed with thousands of eager fans. Fans who were willing to stand in the pouring rain to support him, even though they knew they weren’t going to make it into the stadium because it was already at peak capacity.

We also sensed that the Biden campaign was in some trouble in Minnesota, considering Biden's campaign added a few last minute stops in the state.

Maybe a Republican will claim the North Star State in the next few cycles?

Biden addressed a crowd of supporters in Wilmington, DE early Wednesday morning acknowledging his Minnesota win. He added that he thinks he's in a "good position" to win the whole thing.

I will be making a statement tonight. A big WIN!