Eric Trump, Giuliani Defiant in PA: 'This Is Rampant Corruption' 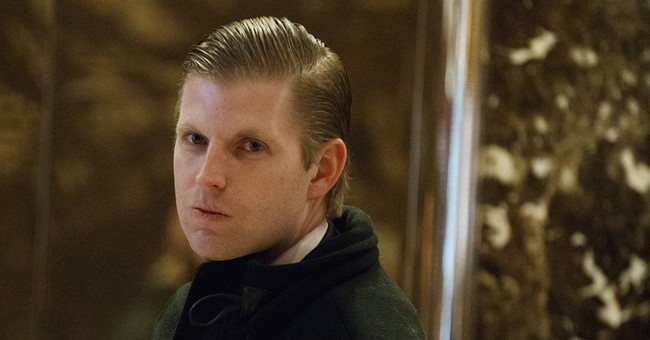 "We've declared victory in Pennsylvania," Eric Trump said at a press conference in Philadelphia on Wednesday.

The president tweeted the same conclusion, "We have claimed, for Electoral Vote purposes, the Commonwealth of Pennsylvania (which won’t allow legal observers)."

The president is in the lead in the Keystone State by some 400,000 votes with 86 percent of precincts reported. But election officials have yet to verify the result. And so, the Trump re-election campaign is suing the state to stop counting votes until they get some transparency.

"We are suing to stop Democrat election officials from hiding the ballot counting and processing from our Republican poll observers-observers whose only job is to make sure every valid ballot is counted, and counted once," Trump 2020 Deputy Campaign Manager Justin Clark explained in a statement. "The eyes of the country are on Pennsylvania, but Pennsylvania has kept eyes off of the absentee ballot counting process all along, and that must stop today. In Philadelphia and elsewhere, Democrat officials forced our observers to stay 25 feet or more from the counting process, leaving no meaningful way whatsoever for our observers to do their jobs. We are also suing to temporarily halt counting until there is meaningful transparency and Republicans can ensure all counting is done above board and by the law."

One of the president's lawyers, Rudy Giuliani, said his team was going to "fight" in court.

“This is beyond anything I’ve seen before," Giuliani claimed in Philadelphia alongside Eric Trump. "This is what comes when you think you have so much power and you own the media that you can do anything you want."

Why, he wondered, has PA still not been called for Trump, even though he has such a sizable lead, with only 14 percent of the vote left?

"The Democrats know the only way they can win this election is to cheat in Pennsylvania," Eric Trump alleged.

"They're trying to cheat," he said.

.@EricTrump in #Philadelphia: Democrats are trying to cheat pic.twitter.com/irs9GpOuvT

Trump alleged that the campaign has found evidence of illegal behavior from the Democrats, including footage of election supervisors donning Biden/Harris face masks in polling locations.

"This is fraud, absolute fraud," he continued. "This is rampant corruption and it can't happen, it's not fair, this isn't democracy."

President Trump declared that Democrats were engaging in voter fraud on Tuesday night during an early morning speech to his supporters at the White House. He said that he and his team would take the election fight to the Supreme Court if need be.