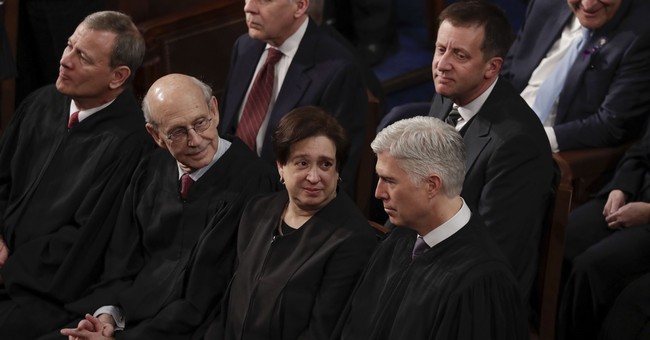 Three Trump-appointed justices are now on the Supreme Court. The most recent justice, Amy Coney Barrett, was confirmed just last week. Democrats balked every step of the way, in part because they feared that the now conservative leaning Court would help tip a close election in the president's favor. Vox Senior Correspondent Ian Millhiser not only predicted that that is exactly what will happen, but he sent some instructions for the remaining liberal justices on the court. According to Millhiser, Justices Stephen Breyer, Sonia Sotomayor, and Elena Kagan should use their dissents to get people to the streets.

If the Supreme Court tries to steal the election, I hope that Justices Breyer, Sotomayor, and Kagan abandon all the normal judicial rhetoric about "respectful" disagreement and use their dissents to call people into the streets.

Social media users had some thoughts about that dangerous suggestion.

For you to presume to know how Breyer, Soto & Kagan would apply law (and how others would not) & imply they(you) are always right, just and justified to promote civil unrest is an arrogant, elitist attitude and exactly why you’ll likely lose again tomorrow. Sad you can’t see that

Ian, I agree with a lot of what you write and, as a voting rights litigator, let me say you’ve done great work on voting rights. But seriously? NO NO NO No stooping, no debasement. Let politicians call upon people to demonstrate & organizers. Justices must remain neutral.

This is a perfect example of the left’s mentality. There will be people who are upset if Trump loses. There will be riots if he wins. The greatest threat to our democracy is the left. Don’t get it twisted. - someone (me) who isn’t voting for Trump

actively wishing that the highest arbiters of law abandon law over an electoral temper tantrum......

Millhiser's message is especially unwise considering all of the civil unrest expected in the aftermath of the election. Business owners in Washington, D.C. and other major cities across the country have prepared for the expected violent riots by boarding up their storefronts, bracing themselves for broken windows and looting.

As many leading Republican lawmakers have noted when another seat opened up on the Supreme Court this fall, Democrats would have done the exact same thing and done everything they could to fill it if the shoe was on the other foot.