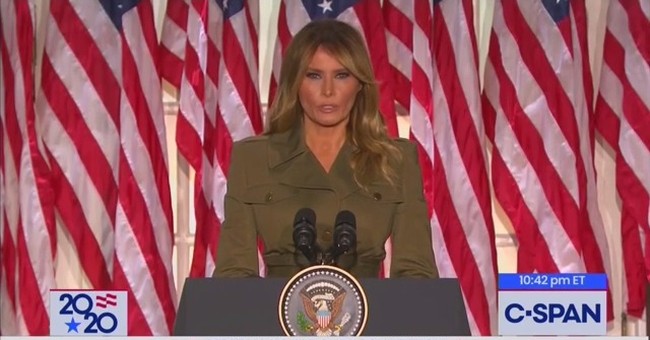 In her first solo campaign appearance on behalf of her husband, First Lady Melania Trump delivered a fiery speech that sounded a lot like one the president would make.

"Joe Biden's socialist agenda will only serve to destroy America and all that has been built in the past four years,” Mrs. Trump said of her husband's opponent in the battleground state of Pennsylvania on Tuesday.

Melania Trump slams Biden’s “socialist agenda” that will “destroy America and all that has been built in the last four years” pic.twitter.com/gsUTgVqtpT

Biden has often suggested that he could have handled the coronavirus outbreak in the U.S. better than the president. Melania mocked the Democrat for that take.

"Joe Biden attacked President Trump's decision to put the American people first and closing travel from China," she noted. "He called it 'xenophobic hysteria.' Now he suggests that he could have done a better job.”

The first lady then lit into Democrats and the media, who she described as two peas in a pod.

"As long as @realDonaldTrump is president our American family values, and the virtues our country was built upon will be upheld.

"Democrats with the help from the media have worked tirelessly to all but destroy our traditional values." pic.twitter.com/dk48t9CDry

“Let us also not forget what the Dems chose to focus on when the pandemic entered our country," Mrs. Trump said. "The Dems were wasting American taxpayer dollars in a sham impeachment. They cared more about removing our elected president."

Melania wasn't done with the media.

“When he decided to run for president as a Republican, the media created a different picture of my husband — one I didn’t recognize — and treated all his supporters with equal disdain," she said. "The media has chosen to focus on stories of idle gossip and palace intrigue by editorializing real events and policies with their own bias and agendas."

In fact, it was similar to the message she had at this year's Republican National Convention.

"No matter the amount of negative or false media headlines or attacks from the other side, Donald Trump has not and will not lose focus on you," the first lady declared in the Rose Garden.