Melania Sends Message to the Media During Sobering RNC Speech 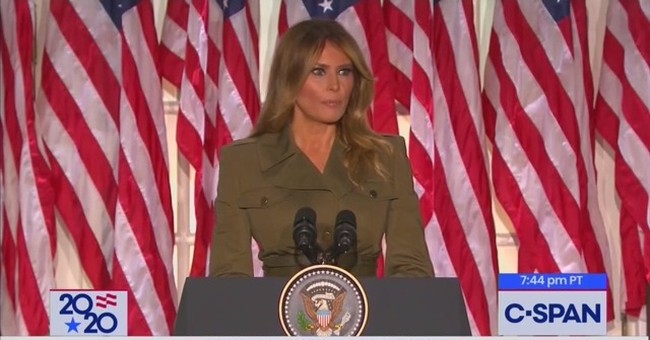 "I know I speak for my husband and the entire family when I say we have not forgotten the incredible people who were willing to take a chance on a businessman who had never worked in politics," Melania began.

Much of her speech, however, was somber as she dwelled on the impact the coronavirus has had on the country. Since March, she said, "our lives have changed drastically."

Melania thanked frontline workers for their nonstop efforts during this unpredictable pandemic, and promised Americans that the Trump White House is doing the same.

"My husband's administration will not stop fighting until there is a vaccine for everyone."

But, Melania noted how "moved" she has been by watching Americans come together, such as the businesses who got creative in how to produce masks.

"Businesses stepped up and volunteers stepped in," she said. "People were eager to share ideas...It has been inspiring to see what the people of our nation will do for one another, especially when we are at our most fragile."

A few minutes before Melania took the stage, President Trump helped oversee the naturalization ceremony for five new Americans. The first lady, who was born in communist-influenced Slovenia, recalled her own road to becoming an American.

"After 10 years of paperwork and patience, I studied for the test and became an American citizen," she said. "It is still one of the proudest moments of my life...I was able to achieve my own American Dream."

She couldn't ignore the racial unrest that has seeped through the nation ever since the police killing of George Floyd. But again, she tried to stay positive by looking forward, not back.

.@FLOTUS Melania Trump: “Like all of you, I have reflected on the racial unrest in our country. It is a harsh reality that we are not proud of parts of our history. I encourage people to focus on our future while still learning from our past.” #RNC2020 pic.twitter.com/CXw68zfcce

Finally, Melania explained what she's been up to with her well-known Be Best campaign, created "to help children achieve their fullest potential." The first lady has focused on teaching youth about the importance of their well being, including the danger of opioid abuse, and promoting online safety.

The first lady took a few important moments to talk directly to people struggling with loneliness and addiction during the coronavirus pandemic.

Having just been the victim of another round of media hazing thanks to her renovation of the Rose Garden, which hadn't been updated since the Kennedy administration, Melania spent a few more moments warning Americans not to believe everything they hear or read.

"No matter the amount of negative or false media headlines or attacks from the other side, Donald Trump has not and will not lose focus on you."

First Lady Melania Trump at #RNC2020: "No matter the amount of negative or false media headlines or attacks from the other side, Donald Trump has not and will not lose focus on you." #RepublicanConvention pic.twitter.com/OngHBX9sS7