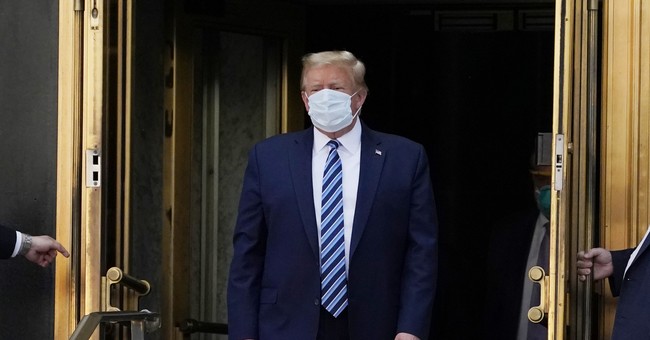 CNN's chief medical correspondent Dr. Sanjay Gupta suggested that President Trump is in no condition to be resuming his public schedule.

"He still sounds sick," according to Gupta, after listening to Trump's phone interview with Fox News host Sean Hannity on Thursday night. Gupta added that once the president stop taking his doctor-prescribed steroids, his "inflammation may come back."

"The President insisted he was feeling great, claiming he saw his doctors earlier in the day and that they believe him to be in 'great shape,'" wrote CNN's Oliver Darcy. "But he sure didn't sound like he was cured, as he claimed to be."

In the clip below you can hear the president clearing his throat a few times, which sent Twitter into a frenzy.

Trump is coughing through this Hannity interview. pic.twitter.com/YuBHzZlSCu

Trump joined radio host Rush Limbaugh for a virtual "rally" on Friday, and the president responded to the claims that he's still unwell. What viewers are hearing, he explained, are the "lingering" effects of the virus.

"You sound great, I've been reading you've got a hacking cough, your voice is hoarse," Limbaugh asked.

He added that he feels "perfect" and is no longer taking any medication.

President Trump spent a few days recovering at the Walter Reed National Military Medical Center in Bethesda, MD, and returned to the White House on Monday. He announced Thursday night that doctors had cleared him to resume his public schedule, meaning that his rally in Florida on Saturday night is a go.

And yet the Commission on Presidential Debates has cited safety concerns as the reason they're canceling next week's in-person presidential town hall debate. Ellie explained why the announcement doesn't agree with the science.