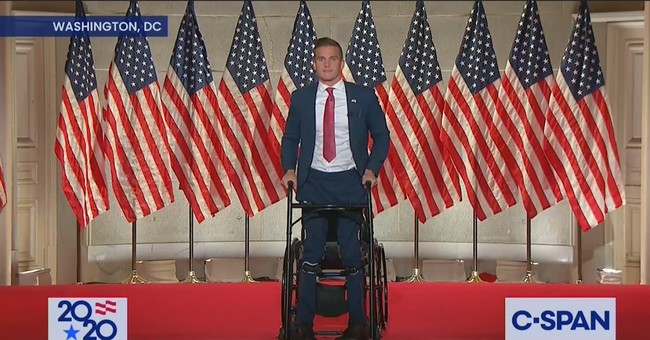 At the end of North Carolina congressional candidate Madison Cawthorn's RNC speech Wednesday night, the partially paralyzed 25-year-old did the unthinkable. He stood.

It was a jaw dropping moment - one that most people found inspiring. But PBS's Yamiche Alcindor found a sinister motive. To her, Cawthorn was trying to make a political statement.

Madison Cawthorn made it a point to stand, suggesting that all Americans to should stand during the pledge of allegiance & national anthem.

It was a direct rebuke of actions by ppl -- including black athletes who are currently sitting out games -- protesting police brutality.

It's true that the national anthem has been a hot controversy these past few years, with several athletes refusing to stand during the playing of the anthem to protest what they say is systemic police brutality against minorities. Yet, I'm sure that was the farthest thing from Cawthorn's mind when he stood up and declared himself to be a "radical for freedom."

A paraplegic standing should be a thing to rejoice. You find a way to make his miracle a reason to be pissed. What a miserable soul you are.

Going after a guy paralyzed in a wheelchair? He’s got more stamina than you. Probably why your so mad. ??

Just here for the ratio.

It’s pathetic to watch you try to shame someone for their disability to fit your agenda. Him standing was so much bigger and more than your political game. Shame on you.

I wonder, will Alcindor say the same about these heroes too, who stood up after Vice President Mike Pence's speech last night at Fort McHenry?