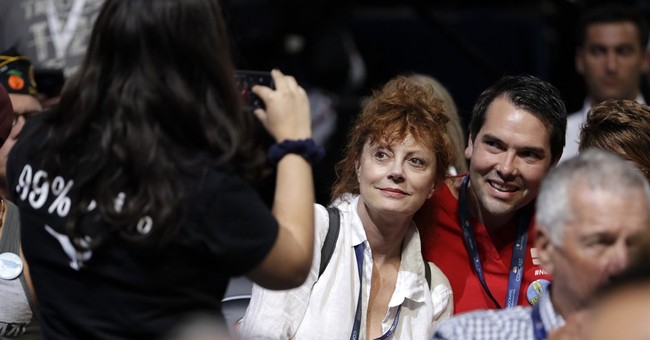 Actress Susan Sarandon became an internet sensation during the 2016 Democratic National Convention because of her distaste for Hillary Clinton. While the Democrats around her cheered for the eventual nominee, a camera caught Sarandon scowling. Social media users concluded she was having the "worst" time at the conference. And she confirmed it.

Sarandon, an Oscar winner and Emmy nominee, preferred Sen. Bernie Sanders. And like many Bernie supporters, she detested the Democratic National Committee for doing their part to stymie his campaign and make way for Hillary. Many voters like Sarandon are still bitter about it, but they're in a much better position this election, with Sanders sweeping the first three presidential contests.

We’re not looking to keep Pelosi because there’s a progressive running against her who supports Medicare for All and the Green New Deal among other things. Check out @ShahidForChange at https://t.co/g293QvlKFB and vote by March 3rd. https://t.co/6G8MWfUzIP

Sarandon's Twitter campaign against Pelosi has earned her the title, "The James Woods of the left." Woods, a veteran actor, is a bit of a rock star in the conservative movement because of his savage messages for progressive lawmakers, liberal media and liberal Hollywood.

Your periodic reminder that Susan Sarandon is the James Woods of the left. https://t.co/wdoHr6Ca8X

James Woods recently returned from his Twitter hiatus, to the pleasant surprise of conservatives.

You all need to verify your own network. Sadly #CNN has become synonymous with fake news or badly vetted research. Every one of these embarrassments sinks you further. Dan Rather and Brian Williams are remembered only as fakers. Don’t let it happen to you. Do better. https://t.co/iuzj3ILOaH