'They'd Rather Have Trump': Bernie Supporters and Surrogates Trash the DNC 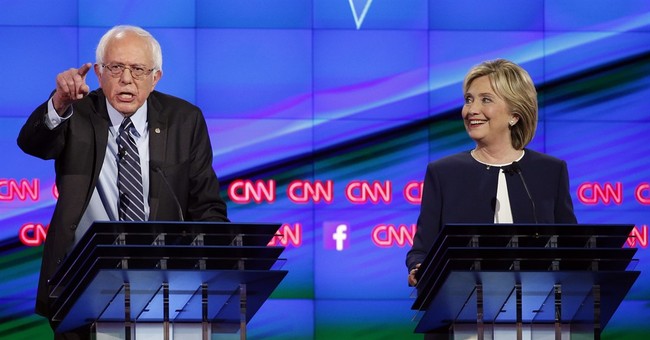 Manchester, NH - The sting of 2016 lingers for Bernie supporters. Their candidate had a shot at being the presidential nominee, but the DNC's obvious preference for Hillary Clinton (remind yourselves of its biased debate schedule here) didn't allow him to get across the finish line. It barely allowed him to get his message out. The process divided the party. And in the week leading up to this year's New Hampshire primary, we found that his voters are still holding grudges.

The DNC "really did structurally seek to undermine Sen. Sanders," said Patrick, a voter from northern Virginia whom I caught up with at a Breakfast with Bernie event last weekend. "There's an understandable skepticism."

One of our other first stops in the Granite State was a Bernie Sanders rally at the Rochester Opera House. We chatted with the folks standing outside in the frigid temperature. Freezing, but smiling, and clearly excited to hear from Sanders, these voters grimaced as soon as I uttered the letters D-N-C.

Nicki from Stratham, NH, said she was still "very" bitter about 2016.

"I don’t trust the Democrats," she said. "I think they’re two sides of the same coin. Although they don’t want Trump to win, they would rather have him than Bernie I think. And they’re probably going to screw him."

Between this bias and the Iowa caucus mess last week, David said the DNC "needs a new face and people you can actually trust."

But just why is the DNC reportedly reluctant to see Bernie as the nominee?

We heard more of the same once we got inside the opera house.

Michael Moore explains why the Dem establishment is afraid of Bernie. #NHprimary pic.twitter.com/OKcdsmGsxE

Nicki, one of the voters we chatted with at the event, added that what happened in Iowa was "completely ridiculous." But she planned to do her part.

She's not one to promote the theories that these contests are rigged against Bernie. But if they are, she offered the same solution.

"Frankly, if it is rigged, we just need people to get out and vote en masse so there's no doubt in their mind that he won."

And that's just what his supporters did on Tuesday. Sanders stormed to first place in the primary in no time. His ability to excite and turn out voters is why his supporters believe he's the best chance Democrats have to take on Trump in November.

Matt found the same sentiments in his conversations with Bernie supporters at his victory rally Tuesday night.

“We got to get Trump out," said Sanders supporter Susan Hackett. "He is insane, but the DNC better play right. If this looks like they’re playing games, particularly with Bloomberg, the way they did with Clinton four years ago – absolutely unacceptable."

But there's a plot twist, and his name is Michael Bloomberg.

David from Beacon, NY, noted that there are new negotiations in place for Sanders to be treated better. But that doesn't explain the warm welcome they've given billionaire Bloomberg, who's used hundreds of millions of dollars to run campaign ads in other states and bought his way on to the debate stage in Nevada this week.

"That sucks for people like Cory Booker and Kamala Harris," David said. "It also is strange that he has associates who are on the committee. So if things go wrong he'll be able to rely on his friends on the committee to push him forward on the nomination."

Something else Bernie's supporters won't believe until they see it? New reports say Bloomberg is considering...Hillary for a running mate.