Joni Ernst Has a Fiery Summary of the Democrats' Impeachment Process 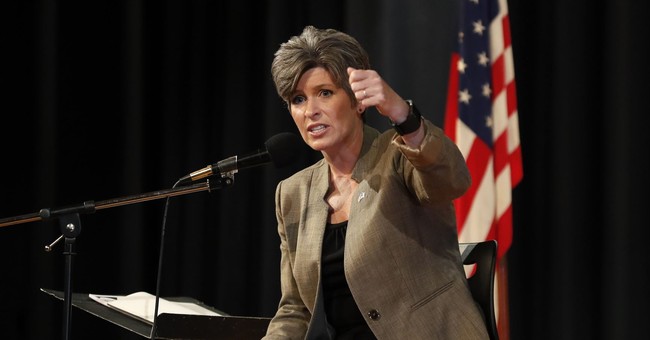 It's safe to say that we can see the light at the end of the tunnel. Months have passed since the Democrats first announced their impeachment inquiry against President Trump. The House passed two articles of impeachment, abuse of power and obstruction of Congress, in December. It was another month until House Speaker Nancy Pelosi (D-CA) transferred the articles to the Senate.

Once she did, the Democrats still stalled. Senate Minority Leader Chuck Schumer (D-NY) insisted they call more witnesses and read more documents before proceeding with the trial. The jurors voted down those amendments. Meaning now — finally — the Senate will vote on whether to convict or acquit Trump on Wednesday.

Seriously, it's happening. Wednesday at 4 p.m., we're getting a vote. And with Sen. Lisa Murkowski (R-AK) announcing she's not going to vote to convict him, all signs lead to acquittal.

That was the technical explanation. But the superior summary came from Sen. Joni Ernst (R-IA) Tuesday on Fox News.

The Democrats' process "has really soured me on this whole experience," Ernst explained to Fox anchor Ed Henry.

"I felt that the House managers really took our Constitution, threw it on the ground, drove a bus over it, then for good measure backed up over it again." #iasen #iapolitics pic.twitter.com/S6ONpAkU3T

"I felt that the House managers really took our Constitution, threw it on the ground, drove a bus over it, then for good measure backed up over it again," she said.

Tell us how you really feel!

Ernst has the right to be bitter, however, after basically being told by one of the Democratic impeachment managers, Jerry Nadler (D-NY), that she and any other Republican who votes against additional witnesses as being "complicit" in a White House "cover up."