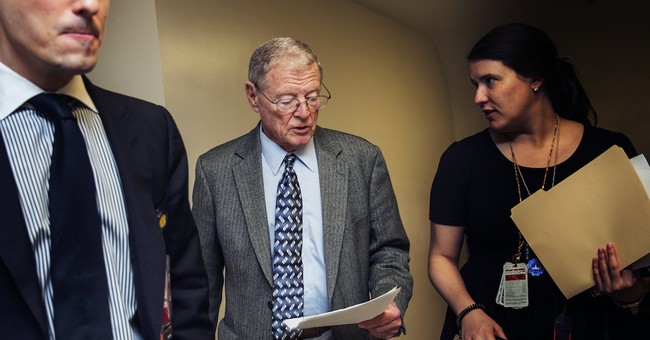 Sen. Jim Inhofe (R-OK) is eager to get the Q&A underway in the Senate impeachment trial of President Trump. The opening arguments are over. The Democrats tried making the case that Trump abused his power on his July phone call with Ukrainian President Zelensky when he asked him to launch an investigation into Joe and Hunter Biden and the gas company Burisma Holdings. The Democrats claim the president withheld aid from Ukraine on the condition he look into the Bidens because it would help him politically. Quid pro quo. Yet, as Republicans have noted, even if it was a quid pro quo, that does not amount to high crimes and misdemeanors as the impeachment managers alleged.

The White House defense team consistently noted that Trump was not interested in boosting his re-election hopes, and he was interested in rooting out corruption. Several Republicans have also brought up some of President Obama's abuses of power. Inhofe intends to put a spotlight on those scandals in his questions on Wednesday. He hopes Chief Justice John Roberts will read them.

FACT: @realDonaldTrump hasn’t committed a crime or an impeachable offense. Democrats have no case. Today, I plan to use my questions to make that crystal clear. pic.twitter.com/5DCP9GFoWZ

"I want to get on the record that Trump has been a better friend of Ukraine than certainly his predecessor," Inhofe explained. "So I want to use my questions to identify some of Obama's worst abuses of power, like the Bowe Bergdahl swap, you remember that, and Fast and Furious."

In 2014, Obama agreed to a prisoner swap that set five Taliban prisoners free in exchange for the return of U.S. Army Sgt. Bowe Bergdahl. Bergdahl had been captured in Afghanistan after deserting his station, and as such the prisoner exchange was a tough pill for Americans' to swallow. Fast and Furious was the name given to the gun walking operation across the U.S.-Mexico border that got hundreds of people killed, including border patrol agent Brian Terry. Some analysts have referred to it as "Obama's Watergate."

"This impeachment thing has been a partisan attack," Inhofe added.

Once it's finally over, he said, he will be much "happier."

Once the 16-hour question period is over, the Senate will vote on whether or not to permit additional witnesses.