Jay Sekulow Asks Senators to 'Put Themselves in the President's Shoes' 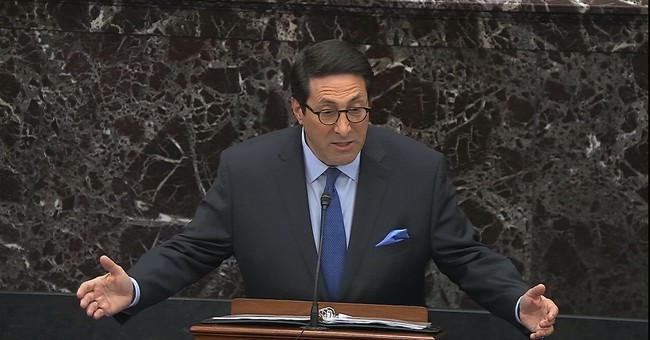 Washington, D.C. - "Danger, danger, danger." That was the theme of Jay Sekulow's presentation on the last day of opening arguments in the Senate impeachment trial of President Trump. At issue, he noted, is whether or not the president abused his power by ignoring the advice of some of his staff on his phone call with Ukrainian President Zelensky. The White House defense team says he unequivocally did not and that there was no apparent quid pro quo when Trump asked Ukraine to investigate the Bidens' Burisma scandal.

"To lower the bar of impeachment would impact the functioning of our republic," Sekulow, chief counsel for the American Center for Law & Justice, argued on Tuesday.

So he urged the jurors to "put themselves in the president's shoes." Sekulow helped them do that by recapping a few of the abuses Trump has experienced the past few years, even before he became president. Such as Crossfire Hurricane. In 2016, then-presidential candidate Donald Trump and members of his campaign were the subjects of surveillance thanks to a FISA warrant that had been obtained on the basis of an unverified and salacious dossier. A scathing Inspector General report released in December detailed just how much the FISA court had been abused.

Democrat "members, managers here, managers at this table right here, said that any discussions on the abuse...were conspiracy theories"pic.twitter.com/hQrqKZBmjZ

"It was a court based on trust," Sekulow said. "That trust was violated."

The abuse didn't stop there. Former FBI Director James Comey decided to leak a conversation he had with the president, which Sekulow said was done in order to obtain the appointment of a special counsel. The FBI lawyer who committed fraud was then appointed to the Robert Mueller case.

Does any of this, Sekulow asked his audience, "bother your sense of justice?"

"Then we ask why the president is concerned about the advice he's being given?" he added.

Sekulow asked the senators to put themselves in Trump's shoes one more time, this time in regards to his phone call with Ukrainian President Zelensky. As others have jocosely noted, Trump was on that call with about "3,000 of his closest friends."

"He knew what he was saying," Sekulow argued.

Trump's team wrapped up their closing arguments quickly on Tuesday. The Senate will reconvene on Wednesday to submit questions on each side.