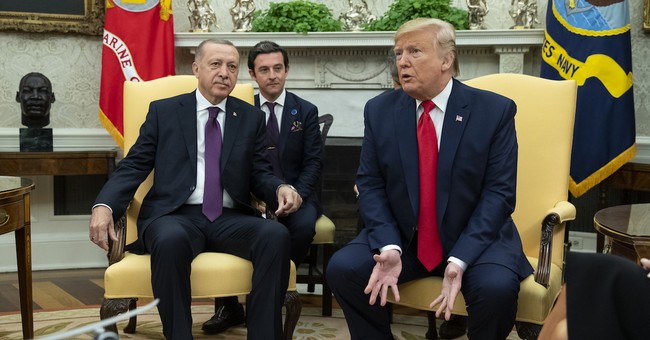 The two men had "a frank and productive conversation" on a range of topics, including the delicate situation in Syria, Trump said. The U.S. and Turkey were able to help broker a ceasefire agreement in the region after a visit from Vice President Mike Pence and Trump was happy to relay that that ceasefire "continues to hold." He thanked Erdogan for his cooperation on that front.

"I'm a big fan of the president," Trump said of Erdogan.

The U.S. and Turkey have the same goal, Erdogan agreed. To fight terrorism. In addition to the recent elimination of ISIS leader Abu Bakr al-Baghdadi, he reported that they've captured several terror-aligned prisoners who had tried to escape.

Trump also thanked Erdogan for the release of Serkan Golge, a Turkish-American NASA scientist who was imprisoned in Turkey for about three years.

It wasn't all hand holding, however. Ahead of Erdogan's visit this week, U.S. lawmakers demanded that his security detail be barred from the U.S., after their violent visit in 2017 when they beat up peaceful American demonstrators.

White House Press Secretary Stephanie Grisham tweeted during one of Trump's and Erdogan's earlier meetings that the president was actually managing to get work done during the Democratic-led "kangaroo court" impeachment hearings.

BEHIND THE SCENES: @potus has been in mtgs all day & this is his second press availability. HAPPENING NOW: Members of Congress & President Trump speaking w President Erdogan on important issues. Meanwhile, the dems continue their kangaroo court, wasting taxpayer time & money. pic.twitter.com/zqDUq01Yi9

A One America News reporter kicked off the Q&A at the presser with a question about the first public impeachment inquiry hearing that had just wrapped up on the hill.

“You’re talking about the witch hunt?” Trump asked the reporter. “I haven’t watched one minute. It’s a joke…This is a sham. It shouldn’t be allowed.”

He added that the inquiry is "wasting" his and Erdogan's time and they should instead be talking about peace in the Middle East.

Trump said he'll be releasing the transcript of a second phone call with Ukrainian President Zelensky "probably" on Thursday.