Turkey's Erdogan Will Visit the White House This Week, Will His Guards Beat Up Americans Again? 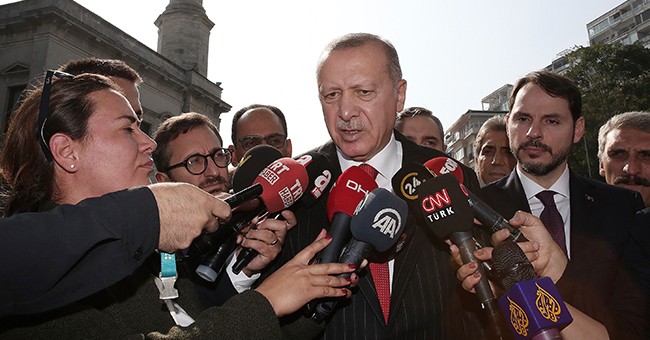 President Donald Trump will host Turkish President Recep Erdogan will be hosted at the White House Wednesday. The two leaders will hold a joint press conference and take questions from reporters in the East Room.

The visit comes as serious questions have been raised about about Turkey's role in NATO. In recent years Erdogan has turned away from the West while becoming uncomfortably close to the Russians and Iranians. It also comes after reports Turkey has been committing war crimes against previously U.S. backed Kurdish allies in northern Syria. President Trump threatened to sanction Turkey over their violent incursion into the region last month, but pulled back after a ceasefire was reached.

During Erdogan's last visit to Washington D.C. in 2017, he personally instructed his body guards and security team to brutally beat American protestors in the streets  just outside of the Turkish Embassy. Many were sent to the hospital with serious injuries.

"The actions seen outside the Turkish Embassy yesterday in Washington D.C. stand in contrast to the First Amendment rights and principles were work tirelessly to protect each and every day. The Metropolitan Police Department made two arrests following yesterday's incidents and we have every intention to pursue charges against the other individuals involved. We will continue to work with our partners at the United States Department and United States Secret Service to identify and hold all subject accountable for their involvement int he altercation," the department released in a statement at the time.

In letter to Tillerson & Sessions, @HouseForeign demands criminal charges vs Erdogan's bodyguards who beat up protesters in DC yesterday pic.twitter.com/IveZJaxwfc

But the charges were eventually dropped due to diplomatic immunity. The White House failed to issue a statement condemning the action. The State Department eventually issued a statement of "concern."

The joint press conference with Erdogan and Trump will likely be held in the afternoon.