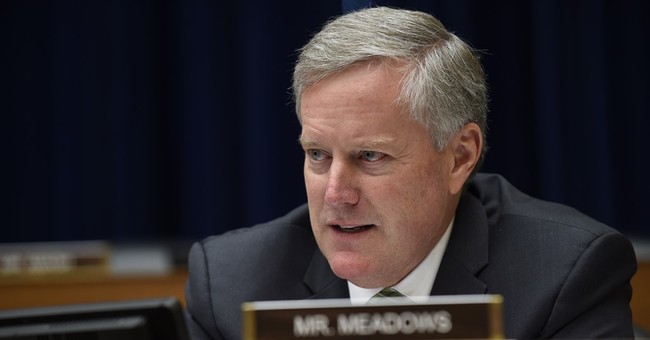 “I was privileged enough to call him a dear friend,” Rep. Mark Meadows (R-NC) said of his late friend Elijah Cummings (D-MD), who lied in state at the Capitol on Thursday. Cummings died last week in Baltimore from longterm health conditions.

“Some have classified it as an unexpected friendship," Meadows continued. "But for those of us who knew Elijah it was neither unexpected or surprising. Not only was he a quality man, we’re able to share a number of personal stories and intimate secrets.”

Cummings often came to Meadows's support, including at a recent House Oversight and Reform Committee hearing. The panel was questioning former Donald Trump lawyer Michael Cohen in February, when Rep. Rashida Tlaib (D-MI) indirectly accused Meadows of racism. He got red in the face and shot back at Tlaib for the accusation. It was then that Chairman Cummings spoke up to defend Meadows, and his intervention prompted Meadows and Tlaib to talk and embrace one another after the tense meeting.

Meadows, who was teary eyed throughout Thursday's speech, also managed to pepper his remarks with a bit of humor.

.@RepMarkMeadows on Elijah Cummings: "He had a smile that would consume his whole face, you know that, but he also had eyes that would pierce through anybody that was standing in his way."

"He had a smile that would consume his whole face," Meadows said. "But he also had eyes that would pierce through anybody that was standing in his way."

He joked about the time Cummings once said that Darrell Issa was "going to make him famous."

"I reminded him that he is not defined by other people," Meadows recalled. "He is defined by the character of his heart, the honesty of his dialogue and the man that we will miss."

Elijah, Meadows said in conclusion, "has gone to a better place."

“Perhaps this place and this country would be better served with a few more unexpected friendships,” he added. “I know I’ve been blessed by one.”