'It's Not Our Problem': Trump Expands on Syria 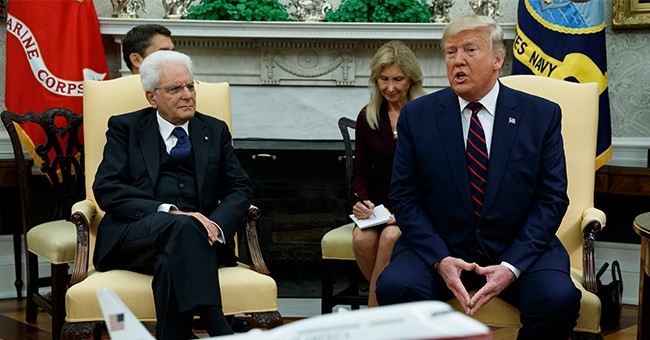 UPDATE: At a press conference with Italian President Sergio Mattarella, Trump expressed confidence in Vice President Mike Pence's upcoming meeting with Turkish President Erdogan as he attempts to broker a deal to stop the bloodshed. Erdogan has so far rejected a ceasefire.

However, if Pence isn't successful, Trump said his economic sanctions against Turkey will be "devastating."

Trump added that U.S. troops "shouldn't be over there."

President Trump answered a few questions on Syria and the Kurds during a meeting with Italian President Sergio Mattarella on Wednesday. He's still facing heat for deciding to pull U.S. troops from northern Syria, especially among reports about a Turkish invasion.

"We can fight our own battles" without worrying about the fighting in Syria, Trump said.

At start of photo with Pres Mattarella of Italy, Pres Trump defends his decision to withdraw from northeast Syria. “We are not a policing agent. It is time for us to go home," he says. Further, "if Turkey goes into Syria it is between Turkey and Syria. It’s not our problem.”

"A lot of countries over there hate ISIS as much as we do," Trump said, arguing they can take care of it too.

Trump mentioned his newly enacted sanctions and tariffs against Turkey as "a far greater" use of power.

"The United States has tremendous economic power, far more power than playing around with having a few soldiers shooting each other at the border."

"The United States will aggressively use economic sanctions to target those who enable, facilitate, and finance these heinous acts in Syria," he said. "I am fully prepared to swiftly destroy Turkey’s economy if Turkish leaders continue down this dangerous and destructive path."

He added on Wednesday: "We're in a strategically good position even though the fake news doesn't make it look that way."

The president reiterated that his administration's goal is to stop, not prolong wars.

"We're watching and we're negotiating, and we're trying to get Turkey to do the right thing," he said. "We want to see wars stop."