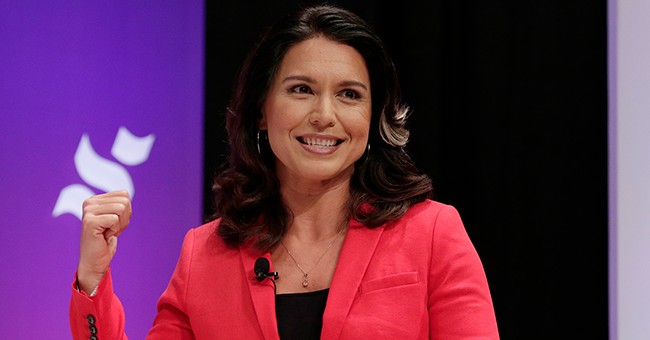 Rep. Tulsi Gabbard (D-HI) intrigued voters last week with her threat to boycott Tuesday night's Democratic presidential debate. She claimed that the DNC was colluding with the corporate media to rig the 2020 election, and she wanted no part of it.

I am seriously considering boycotting October 15 debate to bring attention to DNC/corporate media’s effort to rig 2020 primary. Not against Bernie this time, but against voters in early states Iowa, New Hampshire, South… --> https://t.co/x5P3GFGbyn pic.twitter.com/UgKCj6DGI0

"I am seriously considering boycotting the October 15 debate to bring attention to DNC/corporate media’s effort to rig 2020 primary," she said in a Twitter video on Thursday. "Not against Bernie this time, but against voters in early states..."

"They are attempting to replace the roles of voters in the early states, using polling and other arbitrary methods which are not transparent or democratic and they're holding so called debates which really are not debates at all, but rather commercialized reality television," she continued.

She then read something over the weekend that appeared to "prove her point."

As if to prove my point, NYT just published a “greatest hits” smear piece. All your favorite hits in one article! These are the folks who will be acting as the “neutral” questioners/moderators of Tuesday’s debate lol

But now she's seriously withdrawing her threat, she informed us on Monday.

I will be attending the debate.

No explanation as to if or how her fears had been allayed...just those six words.

Gabbard's social media critics concluded that her decision just gives credence to claims that it was all a publicity stunt.

This was another popular sentiment.

You're polling at 1%. Dont think anyone cares. ?? pic.twitter.com/9GCLrirAzW

Tuesday's debate, moderated by CNN and The New York Times, begins at 8 p.m. ET. Townhall will be live blogging the event.