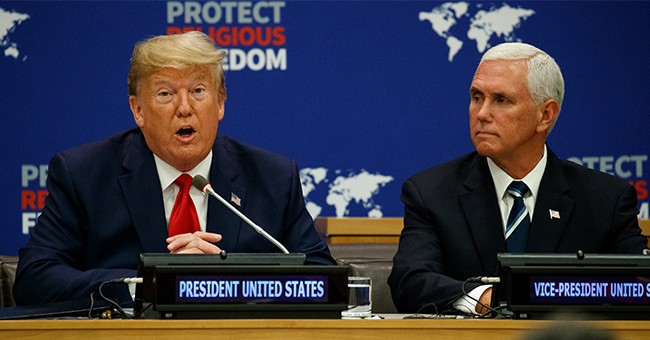 President Trump did not participate in the United Nations General Assembly's 2019 Climate Summit this week, because he instead delivered remarks at the Global Call to Protect Religious Freedom event. He is the first sitting U.S. president to give a speech solely on religious liberty at the UNGA, and he didn't waste the opportunity, urging other nations to step up and defend the religious rights of citizens around the world who are suffering under oppressive governments. If you read The Guardian, however, you would have thought that Trump's priorities were out of whack.

"Donald Trump is set to attend the United Nations headquarters during Monday’s key summit on the climate crisis – but will be there to take part in a meeting on religious freedom instead," the piece continued.

The move is likely to be seen as a blatant snub to the UN climate summit, to be held in the same building on the same day. Leaders from around the world, including the UK prime minister, Boris Johnson; France’s president, Emmanuel Macron; and India’s prime minister, Narendra Modi, are expected at the summit as part of a major UN push to heighten the response to the escalating climate crisis.

UN sources said the booking of the room was relatively last minute and will cause some logistical issues given the major security operation that accompanies the US president wherever he goes. But a senior UN official said they were “not panicked” given the large organizational capacity of the UN general assembly.

I sense a narrative forming, don't you?

For a better sense of the significance of Trump's religious freedom remarks, check out Katie's reporting.