Eli Cummings Says He's Done Being 'Patient.' It's Time to Move on Impeachment. 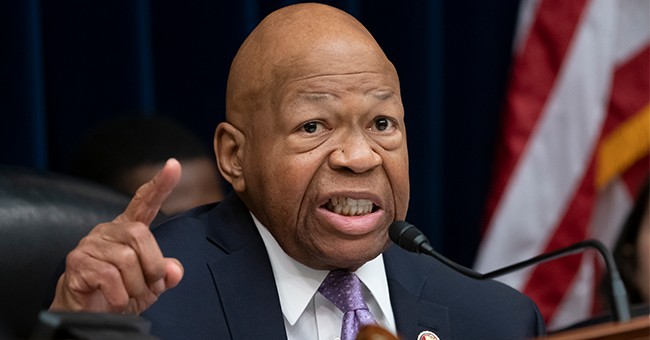 Rep. Elijah Cummings (D-MD) came with a “heavy heart” to the House floor on Tuesday to call for impeachment proceedings against President Trump.

BREAKING: Rep. John Lewis calls for impeachment proceedings against President Trump: "We must not wait! ... To delay or to do otherwise would betray the foundation of our democracy." pic.twitter.com/D12ipUU34m

"We must not wait," the Oversight Committee chairman said. "Now is the time for action."

"We will never find the truth unless we use the power given to the House of Representatives."

"The American people," Cummings added, "have a right to know whether the cornerstone of our democracy was undermined by people sitting in the White House," and "whether a foreign power was asked to intervene in the 2020 election." Last week we learned of a whistleblower complaint against President Trump that accused him of asking Ukrainian President Volodymyr Zelensky to dig up dirt on former Vice President Joe Biden, who is the current Democratic frontrunner in the 2020 presidential primary. Trump denies the charges and says his conversation with President Zelensky was "perfect" and completely on the level.

That's not going to appease Democrats who were already prepared to start impeachment proceedings months ago...years ago? Cummings says he has been "patient" while he and his colleagues have tried "every other path" to get to the bottom of these questions and it's time to act.

"We've got to protect our Constitution, protect our national security, protect the facts," Rep. Debbie Dingell (D-MI) said on Fox News on Tuesday, agreeing with her colleague.

Cummings' clarion call comes among reports that House Speaker Nancy Pelosi is more open to an impeachment inquiry and is even open to holding a vote on it.

DeSantis Is History’s Greatest Monster For Some Reason
Townhall
David French SO upset over tweet from The Blaze's Todd Erzen he called to TATTLE ... it did NOT go well
Twitchy
Hollywood’s Latest Box Office Bomb Is Your Fault, According to Billy Eichner
Redstate
The Morning Briefing: Biden's Last Brain Cell May Be the Death of the Republic
PJ Media