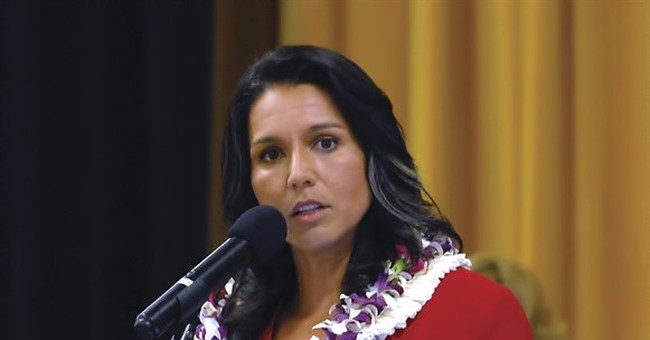 Hawaii Rep. Tulsi Gabbard distanced herself from some of her fellow Democrats in the race for 2020 by voicing her support for third trimester abortion restrictions in a recent interview with Dave Rubin. While the presidential candidate doesn't think the government should be involved in a woman's decision to have an abortion, she does "think that there should be some restrictions." The third trimester, for instance, should be off limits for the procedure.

"Unless a woman’s life or severe health consequences is at risk, then there shouldn’t be an abortion in the third trimester,” she said.

As National Review notes, Gabbard has also stayed far away from Democrats' attempt to repeal the Hyde Amendment, which would ban taxpayer funding of abortion, and she did not sponsor the Women’s Health Protection Act, which would overturn several regulations across the country that are supposedly "medically unnecessary."

Her perspective is miles away from some of the more extreme wings of her party, who think abortion should be on demand. Consider what we witnessed in Virginia earlier this year. Virginia House of Delegates member Kathy Tran tried to introduce a bill that would allow abortions up to birth. Worse, Gov. Ralph Northam endorsed it.

On Tuesday, Republicans will hold a hearing on the Born Alive Abortion Survivors Protection Act, legislation that would stop infanticide and provide medical care for babies who survive abortions. Republicans have tried to introduce a vote on the bill 80 times in the past six months, and each time it's been rejected by Democrats.

Plenty of contenders in the 2020 field have extreme positions on the issue too. South Bend Mayor Pete Buttigieg just a few days ago argued that life doesn't begin at conception - it begins "at breath." He tried to cite the Bible to prove it.

When it comes to late-term abortion, Gabbard is in the company of most Americans. Asked whether or not third-trimester abortions should be legal, 81 percent say no in recent Gallup polling.

The Hawaii congresswoman did gain some fans from her last debate performance, where she challenged Sen. Kamala Harris on her criminal justice record, but she's so far failed to qualify for the next two stages.

Did a Co-Host for The View Realize She Blew Up the Liberal Narrative on ID Mandates This Week?
Townhall
Dan Crenshaw uses poorly aged Dem takes to nuke David Axelrod's 'next-level gaslighting' about vaccine hesitancy
Twitchy
Watch: Fed up D.C. Police Chief Goes Nuts on Woke Leadership Killing His City
Redstate
Joe Biden Had the Opportunity to Denounce 'Defund the Police.' But He Says Something Disturbing and Unhinged Instead.
PJ Media