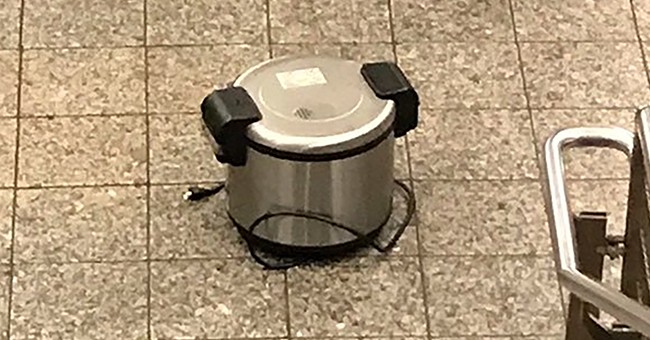 New York City has had its share of scares in recent years. In September 2016, a man planted two pressure cooker bombs in the neighborhoods of Chelsea and in New Jersey. One of them detonated and injured dozens of bystanders. The suspect, reportedly inspired by ISIS and Al Qaeda, was sentenced to life in prison. And I don't even need to get into how every September 11 there is a faded, yet ever present sense of fear in New Yorkers.

In other words, this is the last place to mess with citizens and leave strange devices around. Yet, the NYPD is currently searching for a person of interest who left three suspicious devices around downtown Manhattan, including at the Fulton Street subway station, one of the busiest hubs in the city. All three devices turned out to be harmless rice cookers, but the discovery disrupted the schedules of tens of thousands of commuters.

ADVISORY: Please avoid the area of Fulton St & William St in the Fulton St subway station (Manhattan) due to a police investigation. Expect a police presence and emergency vehicles in the area. Check @NYCTSubway for possible schedule changes. More info to follow. pic.twitter.com/aFIXuhYAf6

The police released two images of the supposed suspect.

The NYPD is looking to locate and identify this individual who’s wanted for questioning in regard to the suspicious items inside the Fulton Street subway station this morning in Lower Manhattan. Contact @NYPDTips at #800577TIPS with info — alert a cop or call 911 if you see him. pic.twitter.com/OFTJgPv2sw

In a press conference just shy of 10 a.m. ET, the NYPD confirmed the three suspicious devices were empty rice cookers and gave the all clear.

The NYPD has cleared the device found at 7th Avenue and 16th Street.

Thank you to New York’s Finest for their quick work and our fellow New Yorkers for keeping calm and patient as the NYPD did their work.

Investigations into this and the Fulton street incident are underway. https://t.co/yEyGSTyfrf