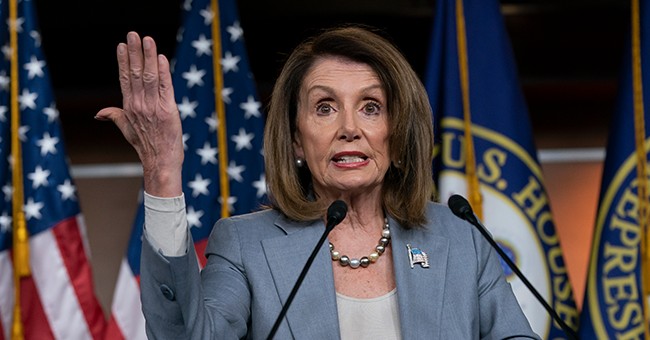 House Speaker Nancy Pelosi brushed aside reporters on Capitol Hill who were waiting in the wings as she emerged from her meeting with Rep. Alexandria Ocasio-Cortez (D-NY) on Friday, annoyed they didn't want to talk about actual issues.

.@SpeakerPelosi doesn’t want to talk abt her meeting w/ @AOC. Walks briskly away from reporters & chides them on even covering it. Says she huddles with members “all the time”

“I wish you would be interested in [my meeting] from yesterday on $ 4 community health centers.”

Yet, what did she expect? Pelosi and AOC's feud has dominated headlines for several months now. They reside at different ends of the party's ideological spectrum, and Ocasio-Cortez has often criticized Pelosi for stifling her progressive agenda and the voices of other minority female freshmen.

So, yes, most of the reporters at the press conference following her meeting wanted to know how it went. Was the hatchet buried?

"I don’t think there was any hatchet," Pelosi said.

She continued to clarify that she has much "joy" in "seeing the diversity in our caucus."

In an exchange with another reporter who asked about AOC, Pelosi explained that all families have fights, before praising the freshman lawmaker as being "very gracious."

WATCH: @SpeakerPelosi says there was no hatchet to bury w/@AOC but noted it was “a meeting to clear the air.” She’s a ”very gracious member of Congress,” Pelosi said. “In a family you have your differences but you’re still a family,” to @CBSNews @nancycordes [H/t @RebeccaRKaplan] pic.twitter.com/qUaxDSAL2c

But the two have also been at odds over whether or not the party should begin impeachment proceedings against President Trump. Ocasio-Cortez wants to move ahead, while Pelosi has stalled.

"Are you running out the clock?" on impeachment, CNN's Manu Raju asked the Speaker, rather pointedly.

"Let's get sophisticated about this," Pelosi responded frustratingly to the question.

Raju explained on CNN following the presser that he asked the question because members of the Democratic Caucus have shared those concerns with him. As Rep. Jackie Speier (D-CA) said Friday morning, if they don't move on impeachment, they will have to "shut it down." After all, the 2020 candidates will be gearing up for the election.