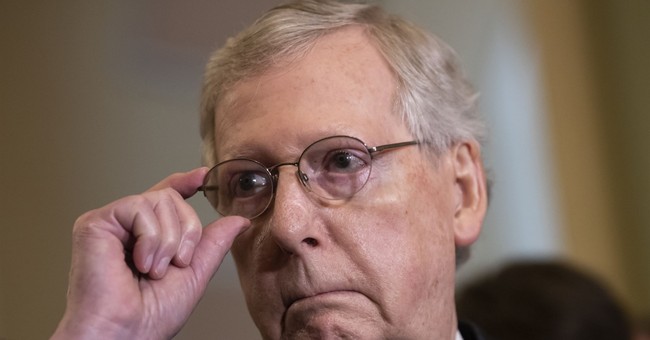 Okay, so conservatives aren't happy with the budget deal. President Trump and the Republicans struck a compromise with Nancy Pelosi on a two-year, $2.7 trillion agreement that passed the House and is likely to pass the Senate next week. It blew up the spending caps Republicans rallied for in 2011. And fiscal conservatives are rightfully pissed.

But, conservatives may find solace in the judicial effort Senate Majority Leader Mitch McConnell made today. As he unveiled next week's agenda, McConnell moved to vote on the lifetime appointments of 19 district court judges.

Leader McConnell has filed cloture on Executive Calendar #119 Michael T. Liburdi to be U.S. District Judge for the District of Arizona

Leader McConnell has filed cloture on Executive Calendar #120 Peter D. Welte to be U.S. District Judge for the District of North Dakota

Leader McConnell has filed cloture on Executive Calendar #203 James Wesley Hendrix to be U.S. District Judge for the Northern District of Texas

There are plenty more where those came from - and they are likely to be confirmed. As Politico's Burgess Everett reminds us, a GOP-enforced rules change this year limits Democrats' abilities to delay the nominations. Under the change, they can only debate the nominees for two hours each. It was previously 30 hours. The "nuclear option" only requires 51 votes, instead of the former 60 votes. Democrats will balk, but it was Harry Reid who first enforced the "nuclear option" in 2013. It may also end up working in their favor in the future.

In any case, McConnell did warn us all.

When it comes to confirming well-qualified judges, we will leave no vacancy behind. pic.twitter.com/wzHg5QP34Z

This is his bread and butter. Part of the reason conservatives affectionately call McConnell "Cocaine Mitch" now is because of his successful congressional efforts to get both of President Trump's Supreme Court nominees confirmed. Both Neil Gorsuch and Brett Kavanaugh sit on the high court today.