Klobuchar Defends, Yet Distances Herself From Omar in WaPo One-on-One 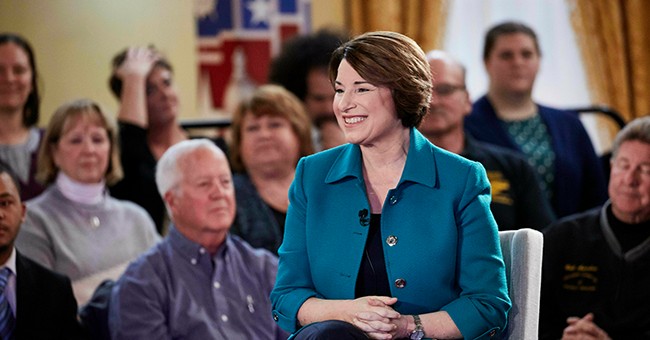 Washington, D.C. - It was Sen. Amy Klobuchar's (D-MN) turn to get grilled by Robert Costa at the Washington Post on Monday. The presidential candidate sat with the reporter for an hour in the latest edition of WaPo's 2020 series to discuss her 100 days agenda, her disagreements with her 2020 opponents, and a few of those recent political scandals you may have seen in the headlines lately.

Regarding President Trump's feud with the Squad, Klobuchar said that, above all, she fears for the Squad's safety - especially her fellow Minnesotan Rep. Ilhan Omar (D-MN). Trump has "singled her out," and, as a result, she's received serious threats. As a reminder, Trump recently told Reps. Omar, Alexandria Ocasio-Cortez (D-NY), Rashida Tlaib (D-MI) and Ayanna Pressley (D-MA) to "go back" to where they came from if they don't like America.

"It is a racist code word and he has specifically singled her out...My immediate concern for her is her safety," Klobuchar said of Omar.

The senator regretted that Trump "stood basking" in the "send her back!" chant at his recent rally. That kind of behavior, she charged, "infiltrates through society." What happened to the decency showed by Republicans like former Sen. John McCain, who immediately condemned one of his rally attendees for questioning Obama's faith in the 2008 election? She answered her own question.

"Republicans haven’t spoken out" about Trump's treatment of the Squad "because they don’t want to piss him off," Klobuchar bluntly guessed.

While she abhors the president's treatment of Omar, Klobuchar noted that she still has "political disagreements" with the freshman congresswoman. That may be why she declined to say whether or not she'd invite Omar to speak at the Democratic National Convention. The only person she knows for sure who she'd invite is former President Obama.

"I haven’t thought through that," Klobuchar laughed. But, she said, "we should have many voices speak" at the DNC convention as possible. Costa asked her about Omar a few times, and each time the senator noted how positive it was that the Democratic Party has such a diverse makeup.

With the Squad talk out of the way, Klobuchar hinted to Costa that she hoped the rest of their discussion would be a policy-directed one. He reciprocated, asking the senator about her health care agenda, and where she and former Vice President Joe Biden differ on those issues. Biden, too, is more moderate, but he's the clear frontrunner. So, Klobuchar needs to make the case why she's the better choice. Like Biden, Klobuchar is not a fan of Sen. Bernie Sanders' Medicare for All, which "clearly" warns Americans it will kick them off of their private insurance plans. She's for building on Obamacare. In particular, she's endorsed the measure put forward by Rep. Brian Schatz (D-HI), which offers a Medicaid-based public health care option. Her plan would also do something she's not seeing from other plans - target out of control pharmaceutical price tags.

Asked what else separates her from the former vice president, Klobuchar mentioned her sex and her geography. She's from the Midwest, and that could really help the party considering the "major issues" they had there last time. She's also got a step up on the competition just by being a woman, she suggested. After all, Nancy Pelosi appears to be the person who "gets under Trump’s skin the most."

With Robert Mueller set to testify this Wednesday before two House committees on Capitol Hill, Costa also had to ask Klobuchar what she's anticipating to hear in those interrogations. She hopes the panels take a look at the transcript from when she questioned Attorney General William Barr. Klobuchar asked one of the very last questions of the day: has the Special Counsel looked at President Trump's tax returns? He said she'd have to ask Mueller.

Klobuchar won't get that chance herself, as she won't be at this week's Mueller hearings. She will, however, have a chance to question FBI Director Christopher Wray at a Senate Judiciary Committee oversight hearing on Tuesday. She told Costa that she'll waste no time in asking the witness about the vulnerability of our elections.