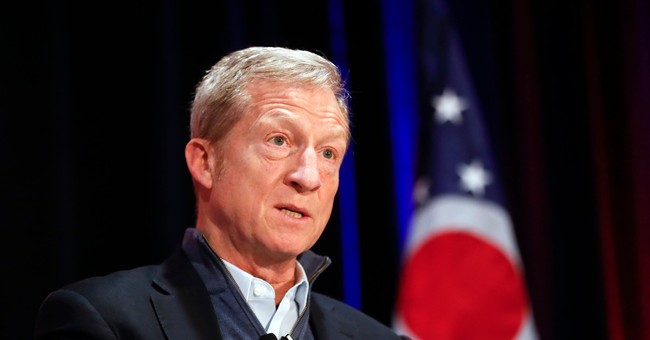 Well, just as we had started narrowing the 2020 Democratic field, it's started to grow again. Tom Steyer, the leftist billionaire political activist whose main objective these past few years has been to impeach President Trump, has entered the White House race. His announcement comes a day after Rep. Eric Swalwell (D-CA) bowed out of the contest.

Steyer's goal, according to his new campaign website, is to "take our democracy back from corporations and special interests, and give it to the people."

Corporations, he said, "don't have hearts, or souls, or futures." What they really care about, is "just making money."

The Republicans are laughing.

“After a false start, left-wing extremist Tom Steyer has finally formalized his self-promotion tour under the guise of a presidential campaign," Republican National Committee spokesman Steve Guest said Tuesday. "The only thing Steyer’s campaign will do is light more of his money on fire as he joins the rest of the 2020 Democrat field in pushing policies that are way outside the mainstream.”

Sure, he doesn't have much of a shot. But he does have the money. The New York Times just released a report detailing how Steyer is shelling out $100 million of his own money to fuel his campaign.

If you asked him earlier this year, Steyer would have said no way to pursuing his own presidential ambitions. He wanted to focus 100 percent of his efforts on impeachment.