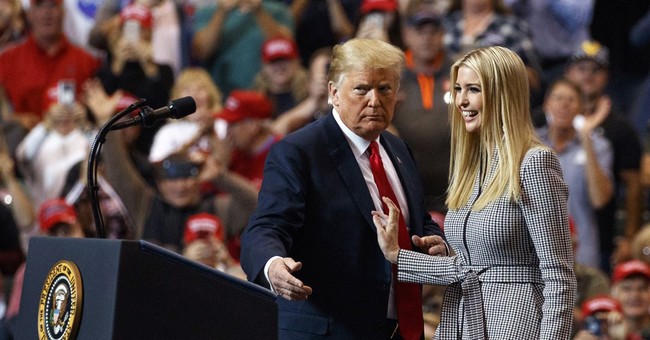 Ivanka Trump, first daughter of the United States, joined her father on his trip to the G-20 summit over the weekend. And it gave her critics the chance to renew their predictable criticism. Rep. Alexandria Ocasio-Cortez (D-NY) was among the Democrats complaining that Ivanka should not be allowed a seat at any international table on our behalf because she has no foreign policy experience or qualifications.

It may be shocking to some, but being someone’s daughter actually isn’t a career qualification.

It hurts our diplomatic standing when the President phones it in & the world moves on.

The US needs our President working the G20. Bringing a qualified diplomat couldn’t hurt either. https://t.co/KCZMXJ8FD9

That critique spiraled over the weekend. Now the hashtag #UnwantedIvanka is a top trend on Twitter, giving social media users a chance to place her face in photographs in which she clearly does not belong.

Conservatives were quick to respond to AOC with the note that she isn't exactly qualified for her job either.

Imagine lacking this much self-awareness.

Maybe the best clap back, however, came from the outgoing Press Secretary Sarah Huckabee Sanders. She contrasted Ivanka's proven record with Ocasio-Cortez's rather lackluster one.

Recommended
Oh My: Breyer Wasn't Ready to Announce His Retirement...So Who Leaked It?
Katie Pavlich

Phoning it in @AOC is wasting your time on Twitter while destroying jobs in NY. @realDonaldTrump & @IvankaTrump actually created millions of new jobs and continue to make the US stronger on the global stage but thank you for reminding Americans everyday why they elected Trump. https://t.co/uGN4GXgAsC

With that mic drop, Sanders has officially completed her White House duties.