Iran: We 'Restrained' Ourselves From Shooting Down Another Plane 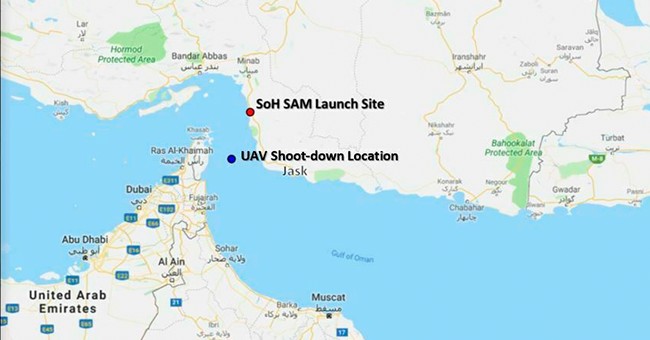 We should be thankful, Iran claimed on Friday, because although they took down a U.S. drone, they "restrained" themselves from shooting down a plane full of people.

Iran shot down an unmanned U.S. surveillance drone over the Strait of Hormuz on Thursday. According to the head of Iran's Revolutionary Guard's aerospace division, it could have easily targeted a nearby manned aircraft.

“At the same moment, another spy aircraft called a P8 was flying close to this drone," Gen. Amir Ali Hajizadeh claimed at a press conference. "That aircraft is manned and has around 35 crew members. Well, we could have targeted that plane, it was our right to do so, and yes it was American, but we didn’t do it. We hit the unmanned aircraft.”

President Trump had approved plans to strike back at Iran, but pulled back Thursday night, as late as 10 minutes before launch time.

....On Monday they shot down an unmanned drone flying in International Waters. We were cocked & loaded to retaliate last night on 3 different sights when I asked, how many will die. 150 people, sir, was the answer from a General. 10 minutes before the strike I stopped it, not....

....proportionate to shooting down an unmanned drone. I am in no hurry, our Military is rebuilt, new, and ready to go, by far the best in the world. Sanctions are biting & more added last night. Iran can NEVER have Nuclear Weapons, not against the USA, and not against the WORLD!

Israel is reportedly concerned about the U.S. response. They want more sanctions against Iran because it's a surefire way to force them to negotiate.

"Its affecting the Iranian economy," Israeli ambassador to the UN Danny Danon argued on Fox News on Friday.