Devin Nunes: Why Are 'Pervy' Dems Asking Hope Hicks About Her Love Life? 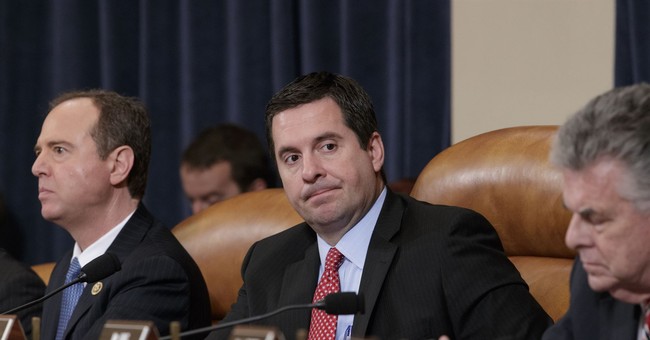 Tim brought you the reactions from Democrats who sat with former White House Communications Director Hope Hicks on Wednesday to discuss the Robert Mueller Russia investigation - again. The lawmakers were apparently frustrated with her uncooperative behavior and accused her of dodging more questions than she answered.

Well, the Republicans have plenty to say about the interrogation too. Such as why it happened in the first place. In a Fox News interview Thursday morning, Rep. Devin Nunes (R-CA) noted that Hicks has already endured hours of testimony before the House and Senate, and Mueller's investigators. Why on earth is she being dragged back to the hill?

“Nobody quite understood why she was back in the U.S. Capitol yesterday doing essentially another deposition,” Nunes said.

It wasn’t a pretty sight, either. According to Nunes's sources in the room, some of the Democratic congressmen were asking their witness some personal questions.

“I think that’s very bizarre to have a bunch of old, pervy congressmen asking somebody who has no new information about her love life," he said. "I think the American people would be ashamed.”

President Trump, who has long been exasperated with the Democrats' "witch hunt," is particularly upset over their treatment of Hicks. He argues they're targeting the wrong person.

So sad that the Democrats are putting wonderful Hope Hicks through hell, for 3 years now, after total exoneration by Robert Mueller & the Mueller Report. They were unhappy with result so they want a Do Over. Very unfair & costly to her. Will it ever end? Why aren’t they.......