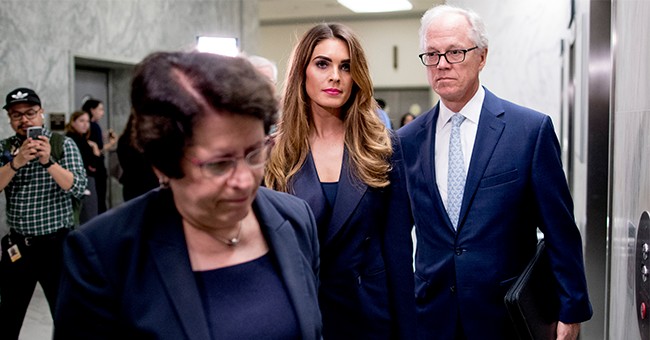 What a colossal waste of time Wednesday was for the American taxpayer and former White House communications director Hope Hicks. President Trump's former right-hand lady testified before the House Judiciary Committee behind closed doors relating to special counsel Mueller's investigation into Russian interference in the 2016 election, but apparently, she declined to answer a variety of questions related to her tenure in the White House. This was expected and it was not exactly clear what the House Judiciary Committee was expecting to get out of Hicks and her team of lawyers besides one or two quotes they could use for fundraising purposes.

"There's a whole bunch of lawyers in there," Rep. David Cicilline (D-RI) lamented to NPR during a break in the hearing. "She's staffed up with many lawyers — her own lawyers, White House counsel lawyers — all there to make sure that she follows White House directions to not share information, to prevent Congress from conducting its oversight."

Hicks was the first senior administration official to agree to testify before the House committee about Mueller and President Trump's orders. The president slammed Democratic officials in Congress for putting Hicks "through hell" months after the Mueller report had already concluded.

As reported by Fox News, Republicans criticized their colleagues in the Democratic Party for wasting taxpayer money and refusing to focus on issues like the immigration crisis.

"The Democrats can try to re-litigate the Mueller investigation," Rep. Doug Collins (R-GA) said. "But, they don’t have the resources and they're simply just having dramatic readings."

Collins added, "This is not something we need to be doing when we have a border crisis, when we have other things going on...this is just another press release for the Democrats."

Hicks was originally subpoenaed by the committee, but after negotiations agreed to a closed-door testimony. The transcript of the hearing will be released in the next few days.