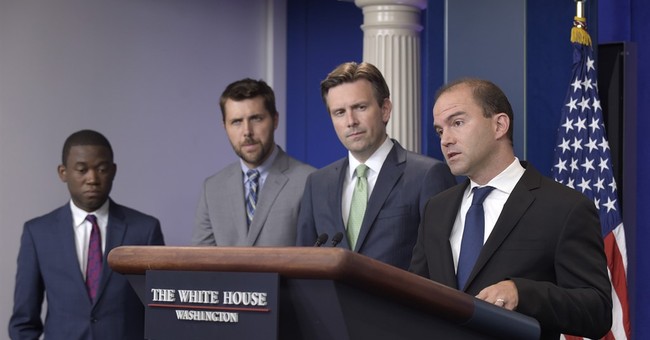 Ben Rhodes, remember him? He was the guy who lied to you about the Iranian nuclear deal to try and sway public opinion in President Obama's favor. The New York Times revealed in 2016 that the former deputy national security adviser spun a nice story about how Iranian leadership at the time was becomingly increasingly moderate. But, Rhodes knew that wasn't really the case. He just "manufactured" the tale because it "politically useful to the Obama administration," according to the Times. We then had a follow-up report that the Obama White House derailed an anti-drug trafficking effort waged by Hezbollah in order to see through the Iran deal.

So, today, Rhodes thought he was qualified to weigh in on how the Trump administration is faring in terms of dealing with Iran today. Secretary of State Mike Pompeo shared State's conclusions last week that the regime was responsible for the attack on two oil tankers in the Gulf of Oman. To Rhodes, that conclusion was made prematurely and it exposed the White House's ill-preparedness.

“When you have an administration with this degree of a credibility gap, allies are not going to trust you,” he explained on MSNBC.

Shameful: @brhodes -- who famously admitted he and other Obama officials knowingly misled the press to achieve their policy goals -- says the Trump administration has a credibility problem on #Iran, defends regime against charges it is behind recent tanker attacks: pic.twitter.com/NA1xGDuXxG

"The truth is, when Trump pulled out of the Iran nuclear agreement, he lied about it," Rhodes said. "He said Iran wasn’t complying. That was his rationale for months. He refused to certify the Iran deal even though Iran was complying. He has a credibility gap on issues related to Iran."

He also said that Iran "has done everything they were supposed to do." It was not a good point to try and make, considering just today Iran warned the world that in a few days' time the regime will be violating the nuclear deal and supersede the limits on uranium enrichment.

Rhodes insisted that the Trump administration must prove that Iran is behind the tanker attacks on an international scale.

Despite Rhodes's doubts, Pompeo's assessment about Iran didn't materialize out of thin air. State determined Iran attacked the tankers based on intelligence, the weapons used, recent events, etc. The secretary said he hopes they can avoid military action against Iran, but will take that step if need be.