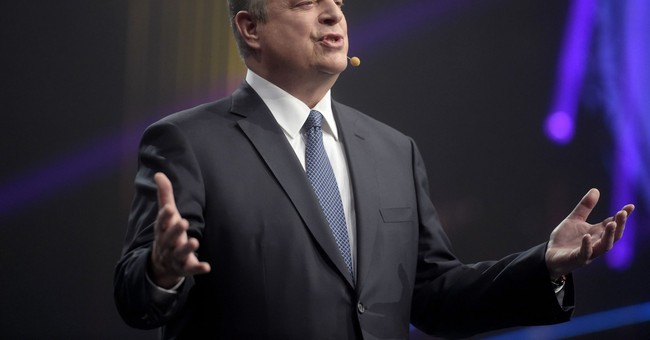 Washington Gov. Jay Inslee, one of the 23 Democrats running for the 2020 nomination, wanted climate change to be strongly featured at the first Democratic National Committee debate. He was sorry to report that his request was denied.

Today, my team received a call from the Democratic National Committee letting us know that they will not host a #ClimateDebate. pic.twitter.com/uqla9oabbJ

He then went on a Twitter tirade accusing the DNC of "silencing" the field on "the existential crisis of our time."

We are running out of time. We've kicked the can down the road for too long. The climate crisis merits a full discussion of our plans, not a short exchange of talking points.

Who else but former Vice President and 2000 Democratic presidential nominee Al Gore weighed in, taking Inslee's side of course.

It's a mistake for the @DNC to refuse to hold a #ClimateDebate, on the most critical issue of this election. Why wouldn't the party listen to its voters and give a platform to Dem candidates' ideas on the #1 issue, to contrast with this President's denial?

Democrats are up in arms over President Trump's recent declaration that climate change is actually just "extreme weather."

Inslee, meanwhile, is among those environmentalists who believe the issue is as dire as terrorism.

If I was Inslee, I'd just be happy I even made the debate stage. He's been polling at one percent, meaning he just barely qualified for the premiere event.

The first DNC debates will be held live from Miami on June 26 and 27 on NBC, MSNBC, and Telemundo at 9 p.m. ET.