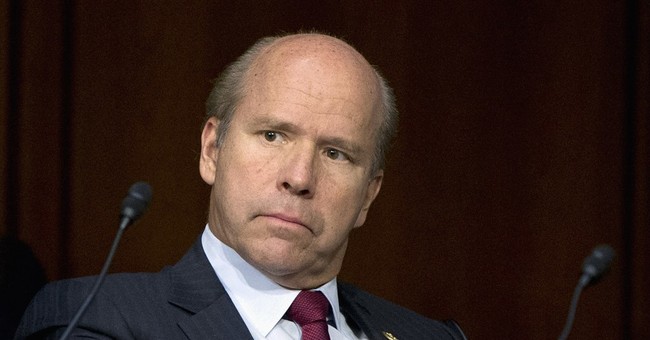 "Medicare for all may sound good but it's actually not good policy nor is it good politics," Delaney said at the California Democratic Convention.

He got extensively booed, but stood his ground at the podium, saying, "This is called the battle of ideas, my friends."

Delaney was then publicly shamed on Twitter by the most prominent progressive in Washington.

Since there’s so many people running for President (& not enough for Senate), instead of obsessing over who‘s a “frontrunner,” maybe we can start w some general eliminations.

This awful, untrue line got boo’ed for a full minute.

John Delaney, thank you but please sashay away ???? https://t.co/0RDOwbfcgv

Delaney's office rejects the notion he should be disqualified for not joining some of the other 2020 Democrats in embracing the extreme health care plan. He responded by accusing AOC of hurting rather than helping her party.

“If Democrats are serious about beating the president at the ballot box, we need less political grandstanding and more truth-telling from the Bernie wing of the party,” Delaney spokesman Michael Starr Hopkins said. “2016 should have taught us that if we allow this primary to become a popularity contest on Twitter rather than a debate of ideas in the public square, the country will lose."

Former Colorado Gov. John Hickenlooper had a similar experience at the California Democratic Convention on Saturday when he dared to speak ill of socialism.

"If we want to beat Donald Trump and achieve big progressive goals, socialism is not the answer," he said, before being booed for more than 30 seconds.

Since when did the Democratic Party become so radical?