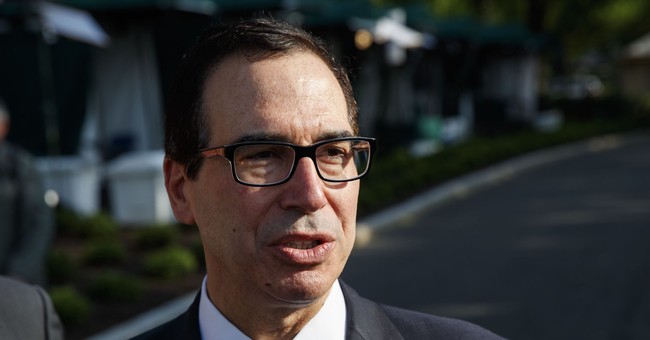 Treasury Secretary Steven Mnuchin sat before the House Financial Services Committee on Wednesday to face a group of Democrats who want President Trump's tax returns. The House Ways and Means Committee recently issued a subpoena for six years of returns, which the administration rejected.

Mnuchin's letter to the Democrats concluded that their request "lacks a legitimate legislative purpose." A federal judge upheld the subpoena, but it was perhaps no surprise considering he was appointed by President Obama. Additionally, the chief counsel's office drafted an IRS memo noting that chairmen of congressional committees don't need "a legitimate legislative purpose" for requesting tax returns, unless Trump evokes executive privilege.

Rep. Jennifer Wexton (D-VA) felt compelled to give Mnuchin a constitutional lesson on the three coequal branches of government at Wednesday's hearing.

"The executive branch, right?" she asked sarcastically. "Which executes the laws. You don't make the laws. We make the laws," she said, pointing to herself and her colleagues.

"I understand there are three branches of government and they perform different functions," Mnuchin coolly responded.

The witness continued to defend Trump's decision not to comply with their demands, insisting he had not violated the law. Since he wasn't giving the Democrats what they wanted, they warned him to get a lawyer.

Rep Tlaib tells Mnuchin to seek out “personal legal advice” in regards to the coverup going on in the White House. pic.twitter.com/OCr4IicYfY

"Secretary, please seek out legal advice personally, of what your obligations are, because the Department of Justice is not protecting you, it's protecting the president," Rep. Rashida Tlaib (D-MI) suggested.

Using the same phrase Pelosi used this morning, Tlaib accused Mnuchin of engaging in a "cover-up" on behalf of the occupant of the White House.

Democrats noted as soon as they won the House last fall that obtaining Trump's tax returns was going to be one of their top priorities.