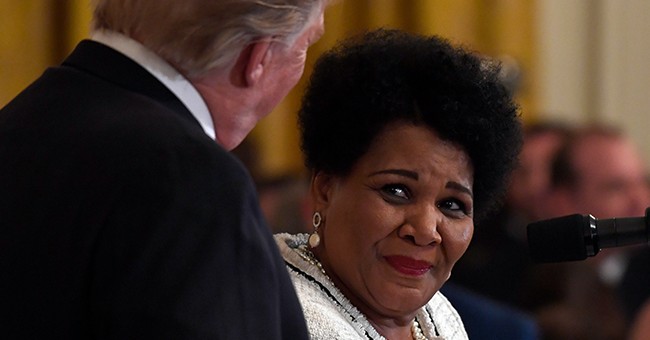 Alice Johnson brought two very unlikely characters together. The 63-year-old great grandmother had been serving a life sentence for a first time nonviolent drug offense, when someone named Kim Kardashian (you may have heard of her) learned of her story. Kardashian appealed to President Trump for Johnson's freedom and, after a few stunning photo ops and conversations between the celebrity and the president, he agreed to commute the rest of Johnson's sentence and give her a second chance at life. Johnson welcomed the news with tears of joy and profuse praise for both Kardashian and Trump.

The now-freed citizen gets very candid in an upcoming FOX News special, "The Alice Johnson Story" this Sunday. In a sit down interview with Ainsley Earhardt, Johnson reveals more about her past drug abuse, her "embarrassing" arrest, and her eventual freedom.

The day of her arrest, she tells Earhardt in a preview of Sunday's interview, was doubly painful because police took her daughter into custody as well.

Police eventually dropped all charges against her daughter.

As a leader on the White House's prison reform efforts, White House senior adviser Jared Kushner also takes part in the Fox special. He was a key part of the administration's successful passage of the First Step Act which, through a series of reforms, aims to reduce recidivism.

Johnson's story "touched him" and offered a "real window" into how the justice system is "far from perfect," Kushner explains to Earhardt.

"The Alice Johnson Story" airs on Fox News this Sunday at 8 p.m. and will also be available on FOX Nation.