Another Democratic Contender Goes After Biden on Criminal Justice, But She's One to Talk 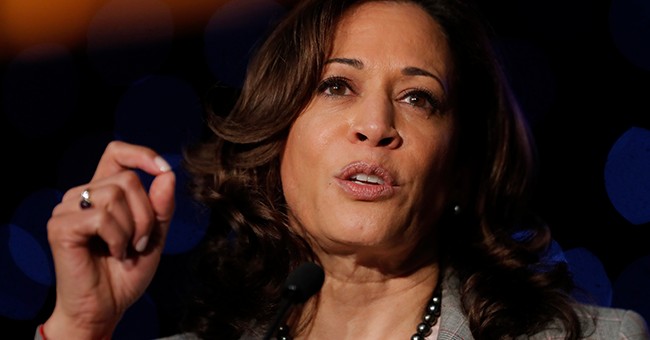 Joe Biden was probably hoping to unite Democrats by throwing his hat in the 2020 ring, but instead, he's finding the other candidates ganging up on him. Progressive contender Sen. Bernie Sanders (I-VT) recently highlighted Biden's rather unprogressive record, like his vote for the Iraq War. Rep. Alexandria Ocasio-Cortez (D-NY), while she's not running for president, has criticized Biden for his lukewarm record on the environment.

Just as soon as he finished defending himself from those charges, Biden is now getting heat from another opponent. Sen. Kamala Harris (D-CA) is calling Biden's bluff on his claim that the 1994 crime bill he helped usher in did not lead to mass incarceration.

The Washington Post fact checkers gave Biden two Pinocchios for that statement, and Sen. Harris would probably add another for good measure.

"I have a great deal of respect for Vice President Joe Biden, but I disagree," she said. "That crime bill, that 1994 crime bill, it did contribute to mass incarceration in this country.”

The legislation, she explained, resulted in the construction of more prisons across the country and marked the first time we had a federal three-strikes law.

That may be right, but she may not be the best person to make the point. Sen. Harris racked up a host of controversies as a top cop in California. For instance, she defended the use of the death penalty when she was an attorney general. She's also targeted parents of truant kids, and those in homeless and low-income situations. The New York Times published an op-ed highlighting her "regressive" record on criminal justice.

Biden and Harris are two of the 23 Democrats currently running for president.