Jim Jordan Reminds Comey of His Own Words About FISA Warrant 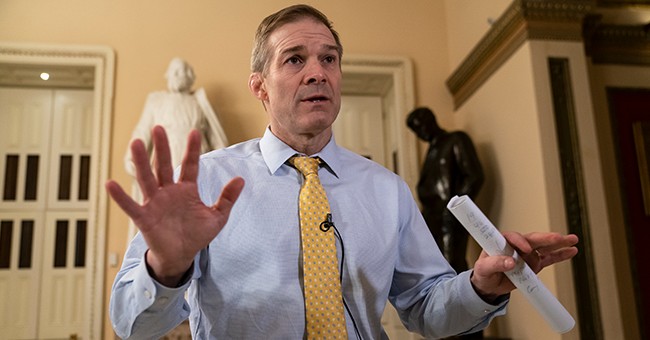 When former FBI Director James Comey told CNN's Anderson Cooper Thursday night that the agency isn't involved in spying, Rep. Jim Jordan (R-OH) was among a host of people shaking their heads. What about the time the FBI used an unverified dossier to obtain a FISA warrant to spy on Trump campaign aide Carter Page? You know, the one the Clinton campaign used as opposition research?

Or the other instance, recently revealed by The New York Times, when the Obama administration sent an undercover FBI investigator to go track George Papadopoulos?

"If that's not spying, I don't know what is," Jordan said.

Jordan also reminded Comey of his own words for the infamous dossier: "salacious" and "unverified."

"Not my words, not Republican words, the director of the FBI," said Jordan.

At Thursday's town hall, however, Comey defended the agency's use of the dossier, noting that “the most important part” of it, that the “Russians coming for the American election,” was accurate. He also said in a recent Fox News interview that the FBI used a "significant amount" of other material in its FISA application. At least, from his "recollection." The correct term for the FBI obtaining the warrant, the former director said, was "investigating."

While the FBI intended to track the Trump campaign and its connections to Russia, special counsel Robert Mueller found no evidence of collusion in his now completed report. Democrats who believe there is still cause for obstruction of justice are demanding the AG release the entire, unredacted report, and held him in contempt for it this week.