Gillibrand Responds to Being Slighted By Gov. Cuomo 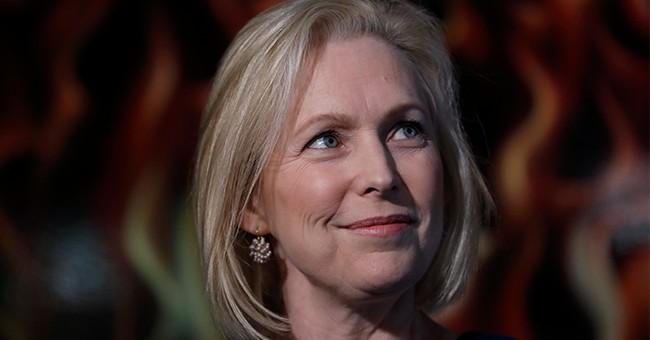 Sen. Kirsten Gillibrand (D-NY) is a 2020 Democratic contender, but she's not getting love from her state's governor. As soon as former Vice President Joe Biden said he was throwing his hate in the race, Andrew Cuomo gave him his support instead of his fellow New Yorker. It may be a return of favor, considering Biden campaigned for Cuomo when he was first running for governor and the two are reportedly good friends.

Cuomo isn't just handing Biden his endorsement. According to reports, he's also "opening his vast and powerful fundraising network" to the former VP. It wouldn't be chump change, either. Cuomo has raised $100 million in campaign contributions since 2010.

The optics are not great for Gillibrand, but she dismissed the non-endorsement as a non-issue.

"Our governor can endorse whoever he likes, but I am the best candidate to defeat President Trump, and I will," Gillibrand said defensively in Nashua, New Hampshire on Friday.

Not according to the governor.

Gov. Andrew Cuomo: "If I had a crystal ball, I would say and I would hope that Joe Biden would get into the race. I think he has the best chance of defeating President Trump which I think is the main goal here." https://t.co/8NAV2oFj3j pic.twitter.com/cezx7zOCO9

Gillibrand is convinced that Cuomo's support can only get Biden so far.

"The truth is, this presidential election will not be won on the endorsements of powerful people,” Gillibrand added.

One endorsement Biden hasn't gotten is former President Barack Obama. But that is apparently by design. Biden explained to the press last week that he asked Obama not to endorse him so that the former president could remain a neutral observer during the primary. That of course won't stop Biden from touting the work he performed in the Obama administration.