Sen. Hirono Suggests That She Was Joking When She Criticized the Green New Deal 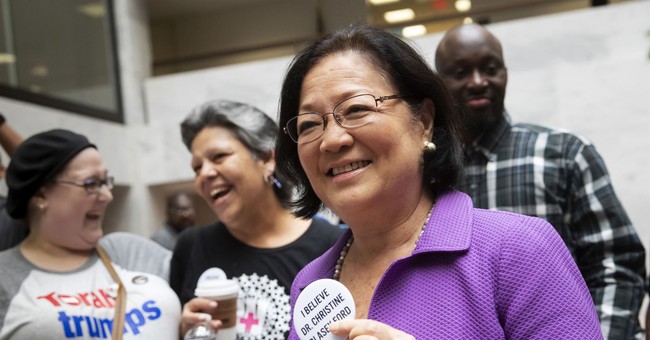 Just kidding! It turns out Sen. Mazie Hirono (D-HI) is a fan of Rep. Alexandria Ocasio-Cortez's (D-NY) and Sen. Ed Markey's (D-MA) ambitious Green New Deal. Hirono was justifiably confused about how her Hawaii constituents would fare if the measure passed, considering it calls for things like reduced air travel.

It certainly sounded like she was mocking Ocasio-Cortez's lofty environmental plan. Yet, when MSNBC's Andrea Mitchell Hirono asked Hirono on Tuesday if she was just joking when she said it, the senator pivoted to attack Republicans, who she says are the real "crazy" ones.

"All they can do is mock and attack," she added.

"They" still includes members of Hirono's own party. Democrats like Sen. Dick Durbin (D-IL) aren't backtracking on their criticism of the freshman lawmaker's farfetched proposal.

Despite his best efforts to make sense of the measure, Durbin couldn't figure out what Ocasio-Cortez was trying to accomplish in the Green New Deal, he revealed quite candidly on "Morning Joe" last week. House Speaker Nancy Pelosi, who lovingly referred to it as "the green dream or whatever," noted last month that it was not a top priority of hers.