Sen. Durbin, Like All of Us, Is Confused By Ocasio-Cortez's Green New Deal 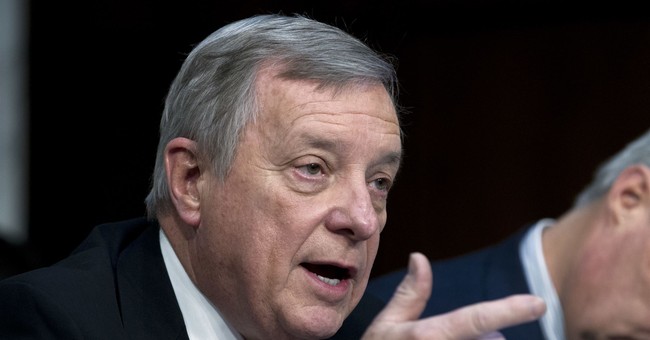 Sen. Dick Durbin (D-IL) joined the group of Democrats distancing themselves far, far away from freshman Rep. Alexandria Ocasio-Cortez's (D-NY) Green New Deal. The measure, which Ocasio-Cortez introduced alongside co-author Sen. Ed Markey (D-MA), demands a lot of us in hopes of combating climate change. For instance, it calls for upgrades to every building in the country, and severely reduced air travel.

House Speaker Nancy Pelosi said the Green New Deal was far from her top priority and even forgot the name of it, while Sen. Mazie Hirono (D-HI) wondered what the limited air travel would mean for her Hawaii constituents.

Durbin is even more lost than them.

“I read it and I reread it and I asked Ed Markey, what in the heck is this?” Durbin explained on MSBNC's "Morning Joe" Wednesday morning, as Joe Scarborough and Mika Brzezinski cackled.

Can it be that even Markey is shying away from his green deal? Senate Majority Leader Mitch McConnell offered to bring it up for a vote a few weeks ago, but Markey said no thanks. He rejected the offer as a "Republican trick."

Don’t let Mitch McConnell fool you: this is nothing but an attempt to sabotage the movement we are building. He wants to silence your voice so Republicans don’t have to explain why they are climate change deniers. McConnell wants this to be the end, this is just the beginning. https://t.co/GUxJ5HG2jb

I mean sure, McConnell was probably trolling Democrats, letting the American people see which lawmakers would actually vote for it. But if Markey was so proud of the measure, what's to fear?