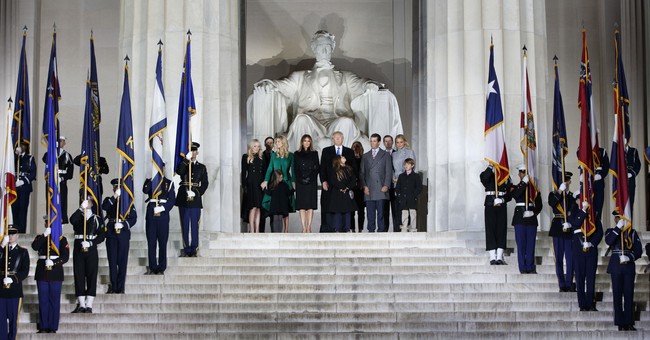 Update: Even Democratic senators are on board! It turns out celebrating America is a nonpartisan affair.

This is actually an excellent idea and I think the whole country should get behind a celebration on July 4. https://t.co/zsBylc4ZhR

President Trump has some major plans to celebrate American independence this year. He'll be holding a celebration called "A Saulte To America" at the Lincoln Memorial, 45 revealed on Twitter Sunday morning.

HOLD THE DATE! We will be having one of the biggest gatherings in the history of Washington, D.C., on July 4th. It will be called “A Salute To America” and will be held at the Lincoln Memorial. Major fireworks display, entertainment and an address by your favorite President, me!

The last time Trump was celebrating at the Lincoln Memorial, he had just been elected president. "The Make America Great Again Welcome Concert" featured performances by the likes of Lee Greenwood, Toby Keith, and 3 Doors Down, not to mention thousands of supporters.

Trump hinted at a Fourth of July concert earlier this month, telling reporters it could become a "tradition."

PBS always hosts a major concert on July 4 as well on Capitol Hill, and they're usually able to score some major talent. Will the two venues be clashing/competing?

Don't worry, we'll be updating you on the schedule and the guest list for "A Salute to America" as the date gets closer!