NYT Writer Accuses Original Mary Poppins of Featuring Blackface. He Has Issues With the Sequel Too. 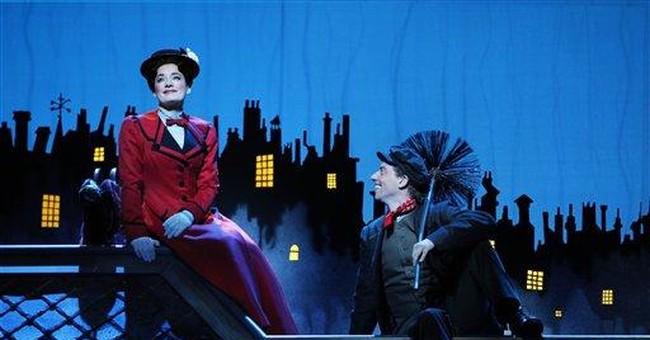 Remember that iconic scene from the original Mary Poppins in which Julie Andrews is dancing with Dick Van Dyke and a host of other chimney sweeps on the rooftops of London? That beloved scene is being reexamined by today's social justice warriors as racist. According to the New York Times's Daniel Pollack-Pelzner, the soot that covered the characters' faces (you know, from the chimneys) was their attempt at blackface. I think you'll find from the following anecdotes that this was a very serious take.

Paraphrasing can only give you part of the picture, so here is the author's reasoning in all its glory.

This might seem like an innocuous comic scene if Travers’s novels didn’t associate chimney sweeps’ blackened faces with racial caricature. “Don’t touch me, you black heathen,” a housemaid screams in “Mary Poppins Opens the Door” (1943), as a sweep reaches out his darkened hand. When he tries to approach the cook, she threatens to quit: “If that Hottentot goes into the chimney, I shall go out the door,” she says, using an archaic slur for black South Africans that recurs on page and screen.

The 1964 film replays this racial panic in a farcical key. When the dark figures of the chimney sweeps step in time on a roof, a naval buffoon, Admiral Boom, shouts, “We’re being attacked by Hottentots!” and orders his cannon to be fired at the “cheeky devils.” We’re in on the joke, such as it is: These aren’t really black Africans; they’re grinning white dancers in blackface. It’s a parody of black menace; it’s even posted on a white nationalist website as evidence of the film’s racial hierarchy. And it’s not only fools like the Admiral who invoke this language. In the 1952 novel “Mary Poppins in the Park,” the nanny herself tells an upset young Michael, “I understand that you’re behaving like a Hottentot.” (New York Times)

Mary Poppins Returns, which came out in December, has a similar issue, Pollack-Pelzner regrets. "Part of the new film’s nostalgia, however, is bound up in a blackface performance tradition" that permeated its predecessor, according to the concerned writer. The sequel, starring Emily Blunt and Lin Manuel Miranda, also makes reference to the minstrelsy that was often featured in P.L. Travers's novels and the Disney universe, according to The New York Times writer. He takes particular offense at the song, "The Cover Is Not the Book," because it references a hyacinth macaw, a bird, that was supposed to symbolize the “negro lady” from Travers's original novel.

It was, many social media users agreed, a stretch to call the film racist over that detail.

Mary Poppins fans begged the NYT to get a grip and leave their childhood alone.

I suppose it's too much to hope this is satire. The world has gone mad.

It’s a compact of powder, that is soot, because chimney sweeps get dirty faces from the soot...nothing more. Leave our happy childhood memories alone, please. pic.twitter.com/kBJEnlgKZa

Or.... it was a fun children’s tale in which people went up and down chimneys and got dirty. There is such a thing as digging too deep for controversy.

Editor's Note: An earlier version of this post had the Mary Poppins author's name wrong. The author of the original novels is Pamela Lyndon Travers, an Australian-English writer more commonly referred to as P.L. Travers.