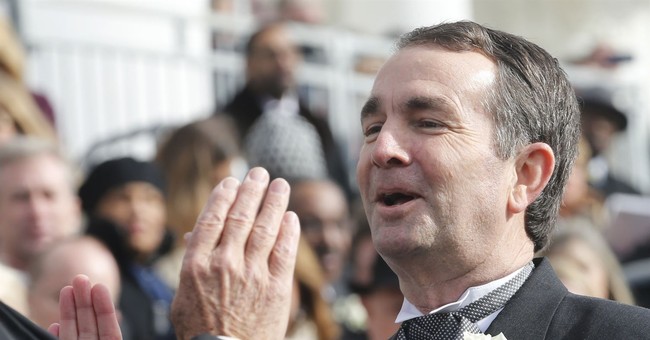 At first he apologized and acknowledged he was one of the individuals in the photo. The next morning, he backtracked and said he wasn't. Virginia Gov. Ralph Northam's confusing tale of events about that racist photo that was placed on his 1984 medical school yearbook page has earned him scorn from just about everyone, none less so than from Virginia Democrats. They want him out.

We made the decision to let Governor Northam do the correct thing and resign this morning - we have gotten word he will not do so this morning.

Northam said in multiple statements this weekend that he regrets the photo, which features one person in blackface and the other in KKK garb, but that he isn't sure how it got there and that he plans to finish his term as governor. He hopes to "regain" voters trust.

At the moment that seems like an insurmountable task, as protesters surround his house and members of Virginia’s Legislative Black Caucus say the governor handled this situation about as poorly as he could.

“I’m not going to resign because it’s not me in that photo,” Lucas said, recalling what he told her.

She responded: “Then you waited too long to say it wasn’t you."

"It is difficult for me to believe anything else he’s saying about this issue,” Sen. Lucas (D-Portsmouth) added.

“It was so deceptive to go into this knowing you had this in your background,” she said. “He expected the public to put their trust in him, but now he’s proving he was never trustworthy. I’m sorry, he can’t whitewash this thing. He must resign.”

The chair of Virginia’s Legislative Black Caucus, Del. Lamont Bagby (D-Henrico), agrees there's no coming back from this.

Resign, the caucus said, so the state can start "healing."