Sarah Sanders: So Hillary Will Be Arrested Now Right? 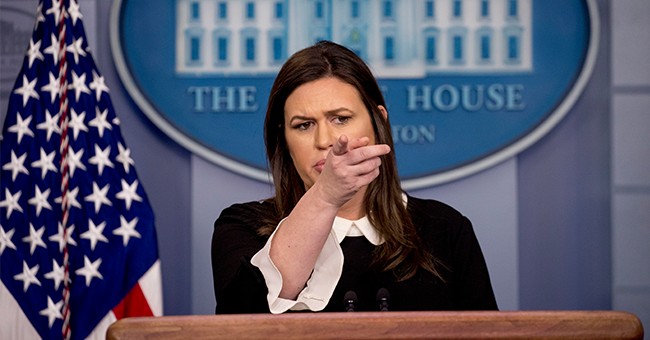 Longtime Trump associate Roger Stone was arrested Thursday night for one count of obstruction, five counts of false statements and one count of witness tampering as part of the larger special counsel Russia investigation. The FBI raided his home and "terrorized" his family, Stone said outside a Florida courthouse Friday. He told a crowd of hecklers he plans to plead not guilty to the alleged crimes.

Of course, White House Press Secretary Sarah Huckabee Sanders expected the press pool to ask her for her reaction to Stone's arrest. But she wasn't a fan of how some reporters framed their inquires, particularly the individual who suggested that President Trump encouraged Stone to lie to Congress.

Reporter: "Was the president encouraging false statements, obstruction, things that are charged in the indictment?"

Sanders: "That is probably one of the more ridiculous and insulting questions... frankly, it's just insulting, it's just not true" pic.twitter.com/SbHqQKceby

Sanders had some questions of her own during her guest appearance on CNN Friday morning.

When will the FBI surround the homes of & arrest, "Hillary Clinton, James Comey, James Clapper? People we know have also made false statements [to the FBI] - will the same standard apply?"

“We’ll let the courts make the decision," she said. "A bigger question is: If this is the standard, will the same standard apply to people like Hillary Clinton, James Comey and [James] Clapper?”

Both Clinton and Comey have themselves been accused of making false statements to authorities.