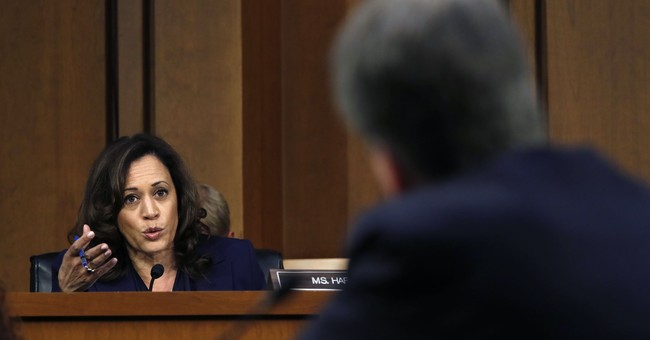 You'll remember that Democratic senators Kamala Harris (CA) and Mazie Hirono (HI) recently tried to force one of President Trump's judicial nominees to take a religious litmus test. They were particularly alarmed by his membership in the Knights of Columbus, a Catholic fraternal organization. In letters to U.S. District Court of Nebraska nominee Brian Buescher, the senators demanded he prove he would judge without bias, citing the KoC's "extreme positions" on abortion and marriage equality.

Thankfully, at least one of their fellow Democrats called them out for their bigotry. Despite her own opposition to Buescher, Rep. Tulsi Gabbard (D-HI) wrote an op-ed piece noting that the behavior of her colleagues was the real issue and that no nominee should be singled out because of their religion.

Whether Christian, Hindu, Muslim, Sikh, Buddhist, Jewish, atheist, agnostic, or anything else, we must stand united in our commitment to protect religious freedom and the right to worship or not worship, safely and without fear of retribution. https://t.co/m4bu6kI6nV

“While I oppose the nomination of Brian Buescher to the U.S. District Court in Nebraska, I stand strongly against those who are fomenting religious bigotry, citing as disqualifiers Buescher’s Catholicism and his affiliation with the Knights of Columbus," she wrote in The Hill. "If Buescher is 'unqualified' because of his Catholicism and affiliation with the Knights of Columbus, then President John F. Kennedy, and the 'liberal lion of the Senate' Ted Kennedy would have been 'unqualified' for the same reasons. Article 6 of the U.S. Constitution clearly states that there "shall be no religious test" for any seeking to serve in public office.”

Gabbard's op-ed came out shortly before she announced her 2020 campaign for president.

Of course, this wasn't the first time during the Trump administration that a Democrat has shamed a judicial nominee for their religious affiliation. During Amy Coney Barrett's confirmation hearing for the 7th Circuit Court of Appeals, Sen. Dianne Feinstein (D-CA) told her the "dogma lives loudly" within her and joined Sen. Dick Durbin (D-IL) in grilling her "orthodox" Catholicism and her pro-life views.

On the heels of Gabbard's editorial, the Senate took the next step and voted to rebuke Harris and Hirono on Wednesday. Sen. Ben Sasse (R-NE) introduced the resolution.

It reads, in part, "that disqualifying a nominee to federal office on the basis of membership in the Knights of Columbus violates Clause 3 of Article 6 of the Constitution of the United States which establishes that senators ‘shall be bound by oath or affirmation to support this Constitution[; but] no religious test shall ever be required as a qualification to any office or public trust under the United States.'"

Like Gabbard, Sasse presented the resolution by citing the bigotry President John F. Kennedy endured for his own Catholicism. After the measure passed, the senator said he would be informing Buescher he can ignore Harris's and Hirono's interrogation.

"If a senator has a problem with this resolution, you're probably in the wrong line of work because this is what America is," Sasse said.

Joe Manchin Is the Grim Reaper for Most of the Left's Agenda Items...And He Just Killed Another One
Townhall
Ted Cruz drops Eric Swalwell and Ilhan Omar for taking Aaron Rupar's 'Nazi salutes' lie and running with it
Twitchy
We Need to Talk About the Huma Abedin ‘Sexual Assault’ Allegation Story for a Minute
Redstate
Braves Fans Rejoice as MLB Backpedals
PJ Media