Mayor Schaaf on Why She Warned Illegal Immigrants About ICE Raid...Both Political and Personal? 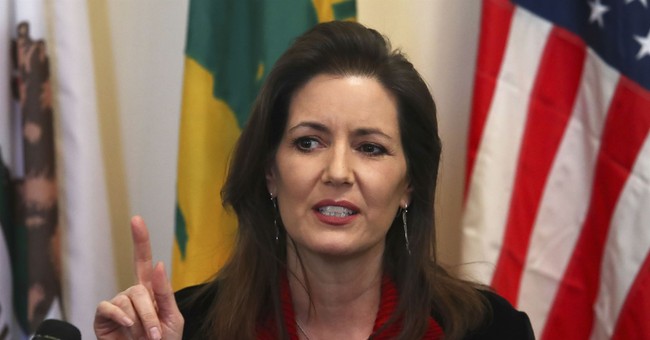 Last February, Oakland, CA Mayor Libby Schaaf warned illegal immigrants in her community that an ICE raid would occur in the next 24 hours. She shared the information in a social media post "not to panic" residents, but to "protect them,” Schaaf wrote at the time.

Her heads up allowed hundreds of illegals to flee and escape the ICE agents' grasp. Of the 232 illegals ICE did manage to capture, 180 of them were found to have criminal records. As then acting director Thomas Homan explained, her decision appeared to have immediate consequences too. A few of the illegal immigrants who escaped went on to commit more crimes.

Despite knowing all this, Schaaf is still pretty proud of herself.

“I have no regrets, none," the mayor said in an interview with BuzzFeed this week. "The more time goes by, the more certain I feel that I did the right thing in standing up for our community and pointing out our values are not aligned with our laws. That’s hopefully the message that is sent out.”

The piece notes that Schaaf's decision was a personal one. She reportedly had two people in mind when making the decision to go around ICE's back: a nurse named Maria Mendoza-Sanchez, who was targeted for deportation, and her personal assistant Karely Ordaz, a DACA recipient.

"How could I live with myself if it came to be that my sharing this information could have kept a family together?" Schaaf explained. "And, of course, I am thinking about Maria.”

Yet, the BuzzFeed piece seems to suggest that Schaaf did it for political reasons too. She was "sensitive" to the tips she received about the ICE raid because she was not currently in the good graces of immigration advocates.

The previous August, when ICE’s Homeland Security Investigations raided a home, Oakland police officers had blocked off traffic, and immigration advocates accused Schaaf of working hand-in-glove with ICE — a no-no in progressive Oakland. The advocates told Schaaf that the next time immigration officers came to town, they wanted to know about it.

And so on Feb. 24, only hours before the impending sweep, Schaaf organized a conference call with local immigrant advocates and religious leaders. She wanted to talk through an extraordinary decision she would eventually make — to warn the public that the feds were coming. The move would catapult Schaaf to the national stage and into the crosshairs of President Trump.

While Schaaf previously cooperated with ICE, now she sounds off on how the agency "has gone astray and has so broken the trust, particularly in cities like mine, I believe we would all be better served to start from scratch.”

The Trump administration is not interested in Schaaf's reasons for disrupting the ICE raid. They just want justice. President Trump slammed the mayor for her foolishness and called her a "disgrace." Then-Attorney General Jeff Sessions gave her a warning of her own: If she didn't start cooperating with ICE, the DOJ would consider filing criminal charges. The department also sued the state of California over its sanctuary city policies.